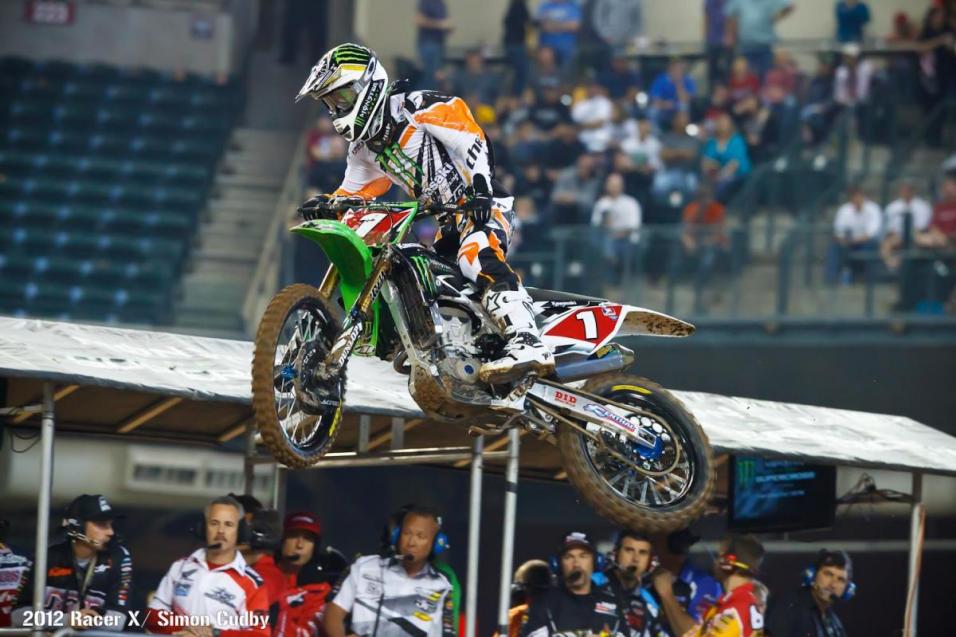 The nerves and hype of Anaheim 1 make the Monster Energy Supercross opener as much of a show as it is a race. Here in Phoenix, it’s all about racing. You can tell the crews are leaner and more focused, the riders have their game faces on, and the actual show—the race itself—could be really impressive.

In the Lites class, the field is very tight at the top, with no less than nine riders taking time at the top of the practice leader board throughout the afternoon. In the end, Dean Wilson’s 51.63 took the top spot, ahead of Eli Tomac’s 51.993 and Zach Osborne’s 52.063. Osborne may have taken a few years off from supercross to race GPs, but the dude hasn’t lost any indoor skill.

Jason Anderson was fourth overall with a 51.197—and briefly he held the top qualifying position in the first practice. This is the shot of confidence the sophomore rider needs. His teammate Martin Davalos was right behind him in fifth overall. Marvin Musquin was sixth fastest, and Tyla Rattray ended the first session in the number-one spot, but couldn’t duplicate it in session two. Still, Rattray is showing major improvements in speed in his second year of supercross.

How deep is the Lites field? Last week’s race winner and the West Region points leader, Cole Seely, was fast, but only ended up eighth overall. Nico Izzi also spent time at the top of the qualifying board by going fast in session one. But the track got faster in session two, and Izzi unfortunately took a big crash and didn’t finish the second session. We will try to get an update on Izzi later this evening—we’re not sure if he’s racing or not. Max Anstie rounded out the top ten overall, behind Izzi.

The SX class was interesting as well. James Stewart looked back to his old self in the first session, carrying big speed through the slower sections and logging the fastest time of the first session, ahead of Ryan Villopoto, Chad Reed, Ryan Dungey and Justin Brayton. But Stewart elected not to ride the second timed session, and the track got faster, so his session one time only held up to keep him in sixth overall. We heard a report that Stewart "is under the weather" so that could impact things.

The fastest? Villopoto, who attacked the track in session two to bust out a 51.219 over Reed’s 51.551 and Dungey’s 51.724. Kevin Windham and Jake Weimer rounded out the top five, with Brayton, Josh Hansen, Trey Canard, Mike Alessi and Davi Millsaps.

Yes, Trey Canard is back and racing tonight. He isn’t quite as aggressive as his old seld, but it’s not bad for being back on the bike for just over a week.

As far as the track, riders are experimenting with a triple-triple combo in one rhythm lane. It’s significantly faster, and it’s doable for the faster 250 and 450cc mounted riders. But, this track will change significantly. A heavy dose of water before practice left the track soft, and deep ruts formed in the bowl turns. But the track crew is now working those turns over and taking the ruts out. Combine that with what should be a more slippery, drier soil by the night show, and the whole race could change. Will that triple-triple even be doable if the riders can’t get out of the corner as clean? Will Stewart bounce back after skipping the second session? And what about that Lites class? There are nine riders within about a second of each other. Should be good tonight.