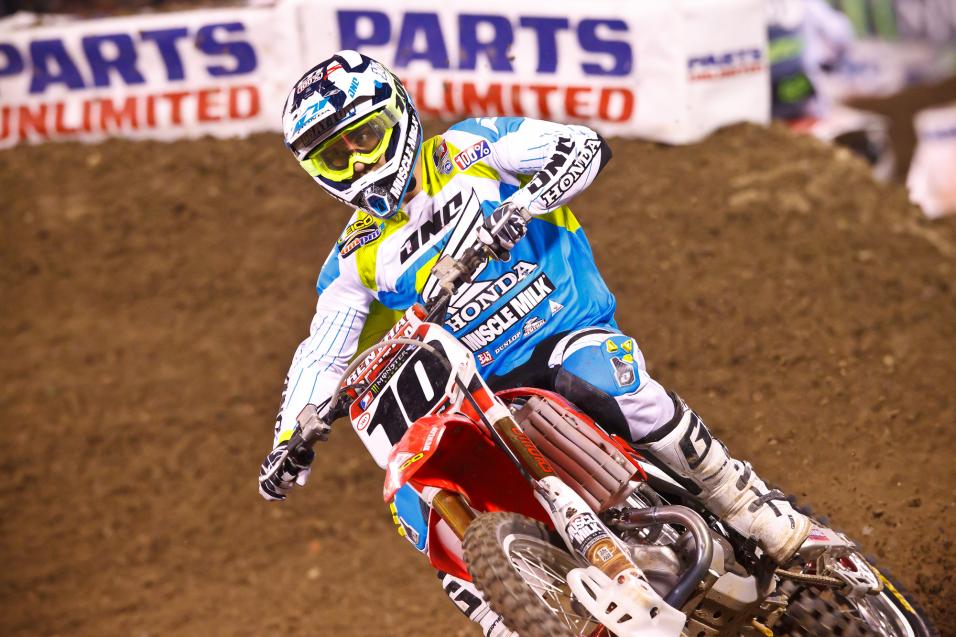 Advertisement | Advertise with Us
Angel Stadium Anaheim, CA Anaheim I (A1) Monster Energy AMA Supercross Championship
We’ve got a ton of stories to discuss after the Anaheim 1 opener, and most of them will end up focusing on the four-pack of riders who are expected to contend for this year’s Monster Energy Supercross Championship. And those four riders—Ryan Villopoto, Chad Reed, Ryan Dungey and James Stewart—showed they are still the forces to reckond with, as they held the top four spots for most of the race at Anaheim.

But the other big story of the season is amount of stories. This year’s field is more than 20-deep in elite talent, and within it lies stories of comebacks, debuts, returns and redemption. So while the lead four did indeed hold the top four spots for most of the race, the other guys were battling just as hard—and eventually two of them broke through and actually finished within that front pack.

Behind the battle between Reed/Dungey/Stewart battle for second place, you’d find even more action. Honda men Andrew Short and Justin Brayton put on the battle of death for a good seven laps, completely shadowing each other’s every move. Their race ebbed and flowed, and then they eventually rolled up on riders like Ivan Tedesco and Mike Alessi. Brayton kept chugging, shaking Short, passing Tedesco and Alessi, and putting himself in fifth. When Stewart crashed, he took advantage and moved to fourth. It wasn’t a podium, but it was a great start to his new season with a new team. 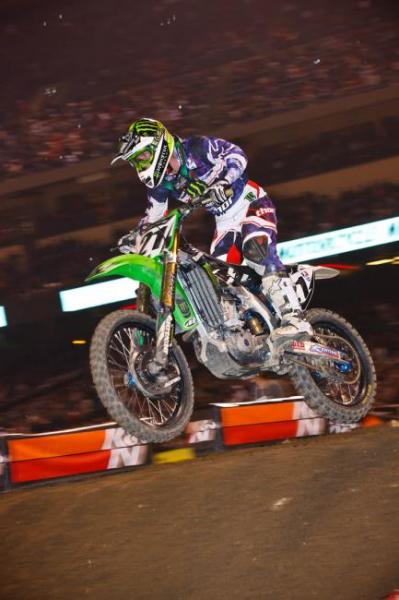 Weimer got to hit reset after missing most of last year's SX tour.
Cudby photo

Jake Weimer put in just as strong a ride on his Monster Energy Kawasaki. He was in that Brayton/Short battle early, but made a brief exit off the track and lost a ton of spots (make a mistake in this pack and you’re losing a places quickly). He stood about 11th and the riders in front of him, like Tedesco, Alessi, Short and Windham, were riding well. But he kept charging, kept digging and showed impressive speed and endurance as he ran them all down. He took advantage of the Stewart crash to take one last spot, and take his first-ever top five 450 SX finish.

No doubt that Villopoto is expected to be the main man at Monster Energy Kawasaki—he proved it by winning last year’s title and dominating Saturday night’s race. But now Weimer is healthy and ready to show what he can do, too. Similarly, Trey Canard is the headline rider at the Muscle Milk Honda team based on his heritage of race wins and championships. But Brayton is giving it his best, too, and for one week at least, stood as the best of the group outside of the expected contenders, and even broke through past one of them. And expect this only to be the first of many great battles in throughout this field.