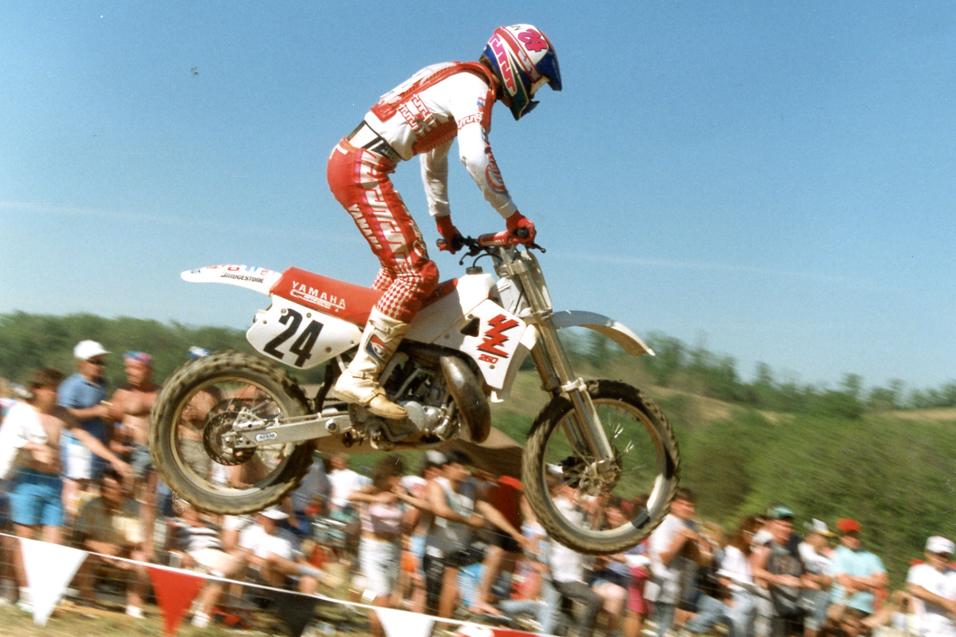 Where Are ? Shaun Kalos

October 5, 2011 12:30pm
by: Nick McCabe
Hailing from Litchfield Park, Arizona, Shaun Kalos first made a name for himself as a promising 13-year-old who wasn’t afraid to mix it up with riders twice his age. The kid from the desert went on to win titles at Ponca and Loretta’s, turning pro in 1987 and immediately earning a factory Yamaha ride. He also generated a lot of attention for having a big bus to work out of in the pits, decades before motorhomes became common like they are today.

With support from his parents and grandparents, Kalos raced all over the world before stepping away from the sport in 1992. He returned to the Arizona racing scene in 2004, retiring once again in ’07.

Racer X: Hey, Shaun, what’s happening?
Shaun Kalos: Oh, not too much. Just been busy raising my four boys and living here in Scottsdale with my wife, Cathy. We have four boys—our oldest is Preston, who is 16. Christian is 13, Gabriel is 8, and Nathaniel, the youngest, is 7. I see that now a lot of guys that grew up in my era are now having kids and doing the family thing, which is cool.

How did you and Cathy meet?
[Laughs] Well, we met at local race here in Arizona way back in the early 1990s. Her brother used to race, and she came out to watch him race. It was basically love at first sight. We got married on May 7, 1993, and have been together since. 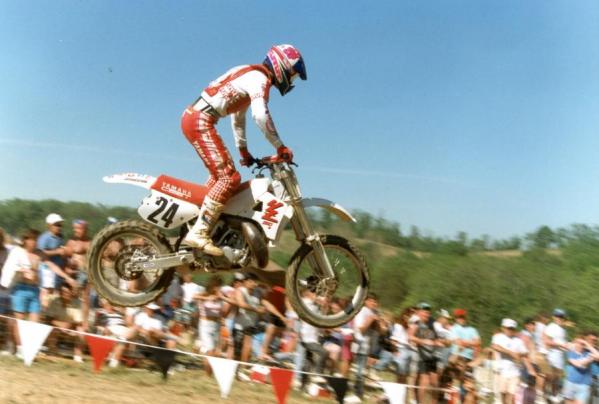 Do your sons ride?
They have motorcycles, but I never really pushed it with them. They’re doing a lot of things I never got to do, such as playing sports and other activities that kids do. I have left it up to them, if they want to ride, we will go riding. But as it pertains to what I did, I would never take anything back. I did what I wanted to do, and it was awesome.

Tell me a little about your career and some of the highlights along the way.
Oh, wow, there were so many! I finished fifth overall in the 1989 250 outdoor national championship. Along the way, I also won a few of the Mickey Thompson Ultracross races and some heat and semi races in supercross. But I would say the time in Europe was very cool. I raced one season over there. At the end of 1989 American season, I went over and raced a few supercross races in Italy. The races over there were two-day races, and I won the second night of each race. Yamaha of Italy, a company called Byrd, was impressed and offered me a full factory ride for 1990 for the World Championships. They had the contract ready to sign on the spot, which was kinda cool, and were really pumped about signing an American. But I took it home and thought about it. It turned out to be a better deal than what I could get in the States, and was for more money. So I took it.

How did that go?
Well, I started out by racing the preseason international series that they have over there. We won the first race, which was held in Mantova. I beat both Jeff Leisk and Donnie Schmidt and was feeling good. But then we went to the second race, which was held at another Italian track, and I dislocated my hip. That put a damper on things, and I never got my full chance to race for a world championship. So I came back to USA and rode for Kawasaki in 1991, and then rode for Noleen in 1992, but by then I was kinda half retired and not taking it as seriously.

So then in 1992 you faced that very tough question that all retired races face: What’s next?
Exactly. I needed to put my energy and focus into something. I decided to pursue golf. I actually got my first real job in my late twenties. I was working at golf pro shop in Litchfield Park and was really focused on that. I was focused on a new sport and a new adventure and was completely out and away from the racing for nearly five years or more. I was cleaning and scrubbing golf clubs in the back room at the shop. So I did that for a while and taught a lot of lessons as well. But then, in 2003, I got a YZ250 just for fun. And then I noticed Kawasaki had a good contingency program for certain vet races, and I knew I could still do well. So I started to race again. I ended up getting a Team Green ride, rode the vet pro stuff from 2004-2007. Man, I had a great time and won something like eleven championships at the big events. I was racing against guys like Doug Dubach and many of the guys I raced against in the 1980s. We ended up wining several of those four-stroke races when they were big, as well as the Arizona State Championship in 2004 in three classes—the 125, 250 and Vet pro. That was cool! 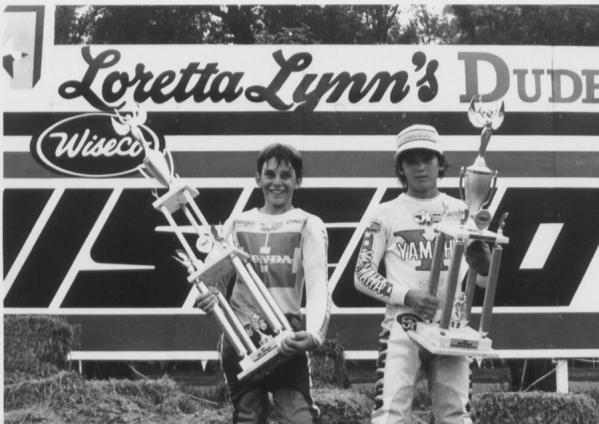 But you stepped away from it again, right?
Yeah. I stepped away from racing 2007. At that time, motocross had become a full-time gig all over again. I was doing clinics and lessons and was racing all the time. But then I then got valley fever real bad. It is basically like mold in your lungs. I got that and had to miss Loretta’s a few times. The sickness was really tough to get over. I ended up in the hospital and was having trouble with breathing. So I just hung it up because I was not reliable and didn’t want to take let down my sponsors. I wasn’t sure where things were going, and it was just time.

So what are you up to now? Do you still ride or teach the clinics?
Since 2007, I haven’t done much in motocross. Now we just ran our own home-based business—we actually have two of them. We are a distributer of organic foods. We bag and distribute the organic stuff. The first is called North Scottsdale Organics, which distributes organic food to restaurants, schools, and families. We also have the Starvation Project, which is a nonprofit set up to feed starving children around the world.

Also, I am really involved in my church now, the Arizona Cardinals. The program has an athlete bible study, and there are quite a few ex-athletes that are involved. I’ve made some great friends through that, and it’s cool to talk about the ups and downs that people experience, regardless of the sport they’re in.

Do you still follow the sport?
Not like I’d like to. I try to follow it on TV as much as possible. I like to watch the riders’ styles and analyze their line selections. But I still love it and wish I could do it. There’s nothing like motocross, and I was lucky that I was able to do it for as long as I did. I still have my bikes from 2007 and still do some one-on-one lessons, but not like I used to. Also, Chris Blose lives close to me, and he knew I used to teach golf lessons. So he looked me up to help him with his golf. That’s cool—we were working on his swing, and he’s getting better! Also, I try to go to the Phoenix Supercross every year, but that’s it.

How do you think the sport has changed?
Man, it’s just a different scene. When I was racing, the starter was a middle-aged ref with a gut and uniform. Today you have this girl wearing a tight outfit holding a board covered with sponsor stickers. But also, a lot of it is still the same. I would say 5 percent of the pro guys make the money. I never understood that. Anyone who is making mains should be making $100,000 a year. That’s the sad part of it, compared to other sports and how demanding it is. The payout just stinks. 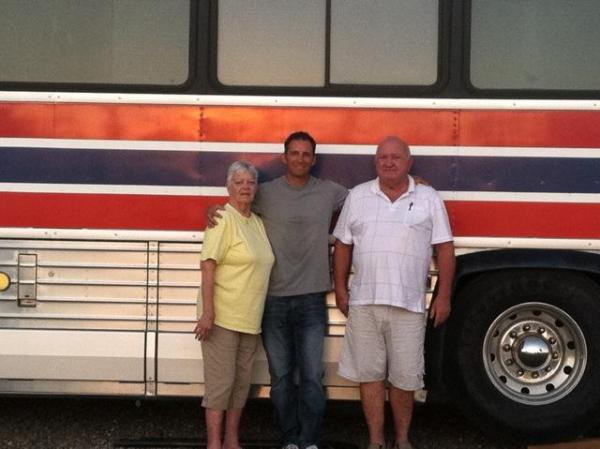 Your grandparents were a big presence in your career during your early days. How are they doing?
They’re good. They are all still out in Litchfield Park, and we try to go out every Sunday. Believe it or not, my grandfather still has that old bus! We got it new in 1984 and rolled into the Ponca City pits with it. Everyone was talking about it. Today, no one would notice something like that. By my grandfather, he starts it up and makes sure it’s still running. It is ready to go! But you know, at the time, I had some issues with him around that. He used to do all these things for me, and I hated all the attention. It made it hard at the time, but looking back, I can see he was trying to whatever he could to help me. He did everything he could, and that was awesome.

Any regrets on your career?
Well, I could have done things differently. As much as my grandfather did for me, we had a strained relationship. When I was giving my lessons, I talked about this. I relied too much on my skills and talent as opposed to putting the real hard work in. I had all the tools I needed, but I could have used some help with the mental focus and training like a professional athlete. I was kinda like the good ol’ boys’ kids—I just spent a ton of time on the bike riding. I would ride an hour or two in the desert and then came home and played basketball, and that was about it. There was not the focus on specifics that kids have today.

But on the flip side, it’s also a little crazy with the homeschool and all that. I also did some crazy things. I once lived in a doctor’s office trying to get over an injury. But you do stupid stuff when you’re young, and for me, it was whatever I could do to be out there. But the guys I raced against—guys like RJ, Wardy, Glover, and Johnny O—those guys were true professionals. I was just a kid who won a few amateur titles and relied on that too much.

Anything else you want to wrap up with?
Well, I just saw a great movie. It is called Seven days of Utopia and is about a golfer struggling on PGA tour. It was a great movie, and I think some of the racers today would benefit from it. Anyway, I just want to say hello to all my old friends who I don’t always see, and thanks for the help and sponsorship over the years. I’m always appreciative for that. When you have to buy your bikes and gear, you realize how good you have it—it’s a real eye-opener. When it is all said and done, you only have the memories.

What is the website for your business and if people want to get a hold of you?
www.northscottsdaleorganics.com