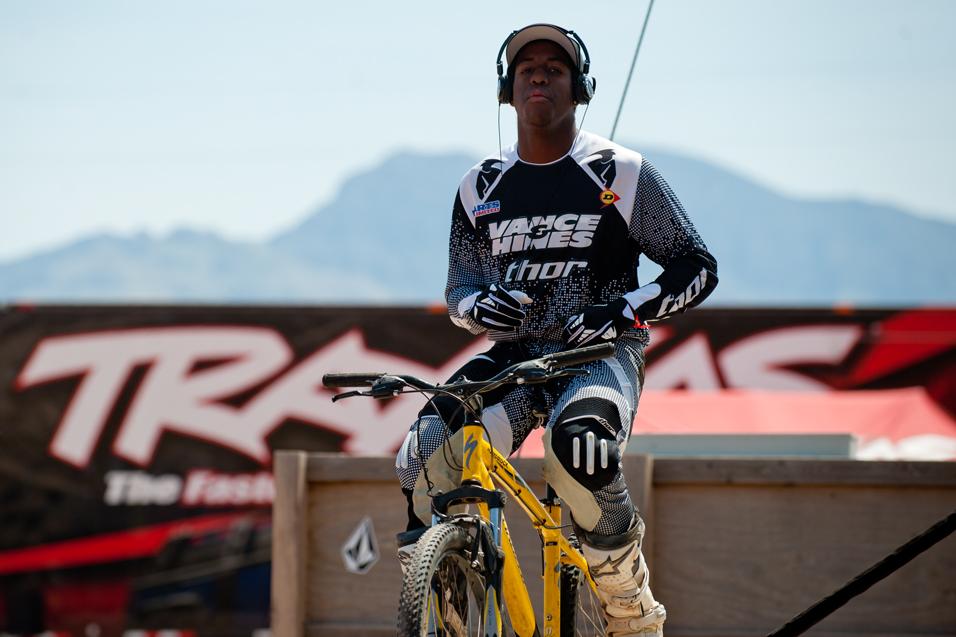 Advertisement | Advertise with Us
Overshadowed by fellow Loretta Lynn’s graduates Justin Bogle, Kyle Peters, and Chris Plouffe, Californian Preston Tilford made his pro debut at Pala far from the limelight. But after an impressive 21-18 performance for twenty-first overall, topping both Peters and Plouffe, eyes around the industry were opened. Now Tilford, along with about twenty other privateers, are left fighting for a ride next season. We caught up with Tilford earlier this week to get his thoughts on his pro debut, and his plans for 2012.

Racer X: For those that don’t follow amateur racing, how would you characterize your amateur career—in a nutshell?

Preston Tilford: Basically my amateur career was a learning experience. We didn’t really know how to go about it; we kind of just jumped into it. These last two years I have been with Vance and Hines Racing and I give all my credit to them, I really appreciate all of their help. This last year I started to figure out what I need to do as far as training and toward the end of the year I began training with Ryno [Ryan Hughes] and he has really helped me out a lot. I think we fit together really well. I think I had a good year this year, I don’t think it was the best I could have done, but I gave it my all and I think if I give it 100 percent that’s good in my book. 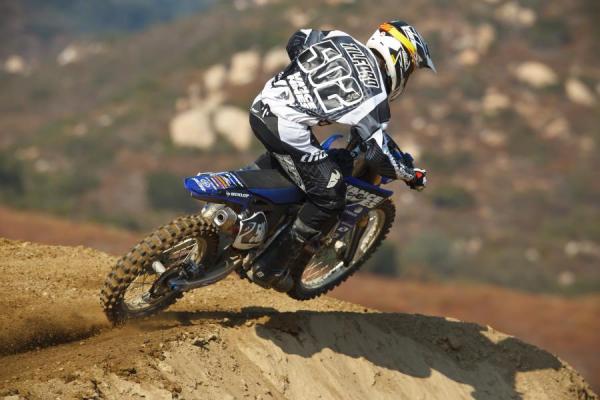 Tilford was impressive in his pro debut at Pala with 21-18 moto scores.
Photo: Simon Cudby

You came in under-the-radar for your pro debut at Pala, but really opened some eyes with your 21-18 scores. How do you feel your pro debut went?
I think it went really well. When I got to the race it didn’t feel as pressured as amateur racing because it is so organized. Everything is so timed and organized, which fits my style and the way I like to do things. In my first practice I got the second fastest lap [B Practice] and in the second practice I got second again. I thought track was awesome. I really liked how rough it was, how they didn’t really touch the track. I really like it when the track is really rough, because if the track is smooth the top-five guys they can hold it wide open and they’re gone, but if the track is rough it really shows who works hard—and I feel like I work really hard. In the first moto I got a top-twelve start, but I hit a huge breaking bump and went down. I was able to keep the bike running and finished twenty-first. Then in the second moto I got an okay start and just rode hard and picked some people off. About halfway through the moto I was passing some of the Star [Racing] guys and I was like “Those are factory guys,” and that really made my day. I was so happy, and that is what helped me get that extra boost to finish the moto. It didn’t really hit me till like two days after that and I was so excited that I wanted to do it again.

What did you do to prepare yourself for thirty plus two? Did you change anything in your training regiment?
Actually, I keep my same training schedule because Ryno [Ryan Hughes] said that if I keep to the schedule I was on that thirty minutes wouldn’t be a problem for me. I trusted him, so I just kept my same training schedule. We did laps, sprints, starts, motos, and really pushed the issue leading up to Pala. After I finished the first thirty I was like, “That really wasn’t that hard.” And I talked to Ryno and he said, “Yeah, because you have been working hard toward it. And now that you have that feeling you can push harder through the second one, because the second one is the hardest and now you know how long and how your body is going to react to it.” I think I felt stronger in the second moto because I knew what to expect after racing the first moto.

Was there any reason behind the decision to wait until the final round to make your debut?
There was a little bit of reason because the way that Vance and Hines wanted to do their stuff, and so they just decided on doing it at the end of the year. Also it’s [Pala] my home track and they thought that would be the best. It also gave me more time to train and work out before so that I was fully prepared going in.

Did making your pro debut at your home track [Pala], make the transition to the pro ranks easier for you?
Yeah I think it helped a little bit. It did help riding the track a lot, but I think mostly it helped me more mentally for my first race. To be at my home track and with my family helped me out a lot. I think at any other track I would have been just as good, but for that first one it helped. 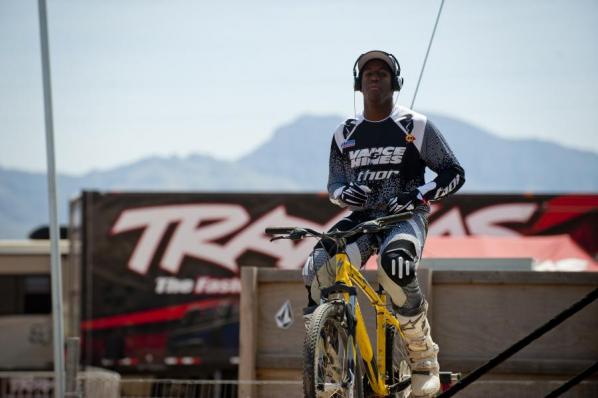 Ryan Hughes had been a big part in Tilford's transition to the pro ranks.
Photo: Ryne Swanberg

Are you planning on racing the full season as a pro in 2012?
Yeah, I definitely want to do West Lites and the outdoor nationals. I don’t have anything lined up right now, I didn’t have an agent until about two weeks ago so I don’t know how this thing works, but he and I are trying our best to get my name out there and if I get a chance I will show whoever that is that I’m worth it for next year.

Do you feel like you made an enough of an impression at Pala to put your name on the map?
I definitely thought that I could have done a lot better, but I think I did good for my first time. I didn’t crash, I didn’t pull off, I finished the moto and Ryan [Hughes] said to make your debut good you need to not crash and finish the moto and get a good start and don’t complain about it after. I think I did that to my full extent and I think I did pretty good for that race.

How much of any influence has Ryan Hughes been in your transition to the pro ranks?
He’s been a very good influence on me. He’s been telling me about how he has learned a lot since he has stopped riding [pro ranks] and how he has gotten a different perspective on how to do stuff. He has been very helpful with everything. I needed some fine-tuning here and there with the way I rode and he helped me make that transition to the pro class. We rode with Ricky Dietrich, Travis Baker, Jessica Patterson and a bunch of other guys, and just seeing how they rode and watching their starts helped a lot. 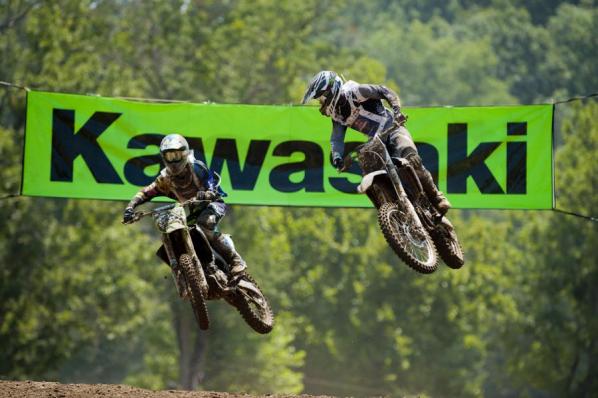 Tilford is hoping to make his SX debut at A1.
Photo: Ryne Swanberg

What are your plans for the next couple of months to prepare yourself for A1?
There are some tracks at Milestone that I will start riding. I rode supercross once before Pala and judging by how that feels, it feels like a sprint kind of thing. So I will probably start running a lot and start doing a lot of high intensity workouts so that I can get my brain focused for the whole twenty laps. I know that it is easy to make mistakes, so I think that it is important to have your mind in the right place during the race.

What are your expectations going into next year?
I would be happy with making every main. I want to make every main that I enter and be in the top lap times. I would like to be around the top-ten, top-fifteen, and I know that if I put my mind to it I can do it.

Thanks again Preston. Who would you like to thank for helping you out this season?
First of all I would like to thank the Lord Jesus Christ. I would also like to thank Ryan Hughes, DT1 Services, MTA, Motocross Action, Jody Weisel, Willy Musgrave, Willy Surat, Greg Pierce, a big shout out to Vance and Hines Racing I wouldn’t be there without them, Tim and Allen Olsen. Just everyone that supports me, I would like to thank all those people.