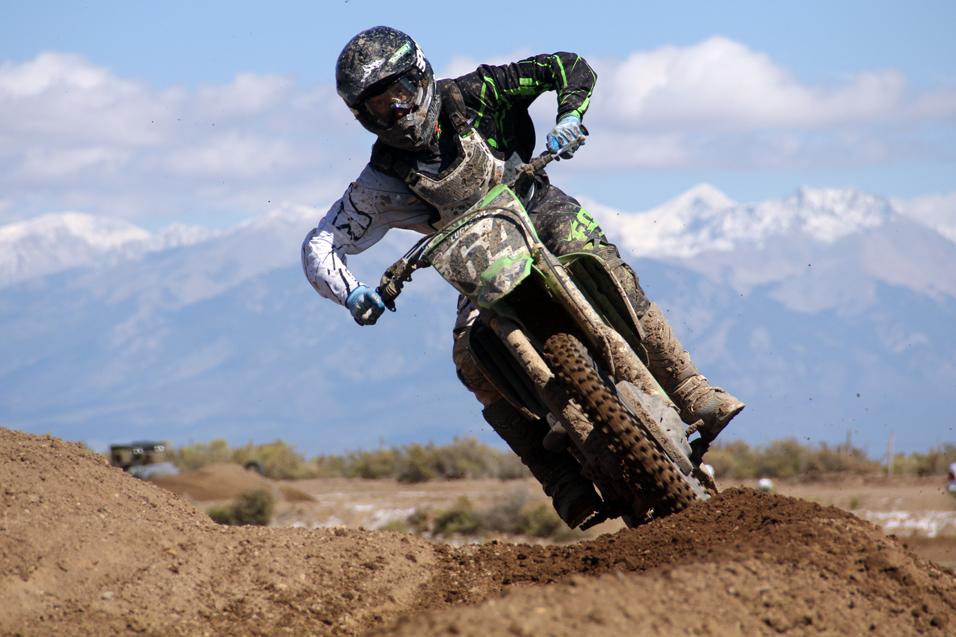 Advertisement | Advertise with Us
At just 20 years old, Derek Anderson was a rising star last year. As a full-on privateer, Anderson finished 26th overall in the 450 Class in his rookie season. But now, a year later, Anderson is still struggling to get back to full strength after a back injury caused him to miss almost the entire outdoor season. We caught up with the Colorado native earlier this week to see how the injury was coming along and talk about his season debut at Pala—the last race of the year!

Racer X: You dealt with a pretty serious back injury that caused you to miss basically all of 2011. How is the injury coming along?
Derek Anderson:
Yeah, definitely not the worst injury, but any back issue is not good at all. I herniated a disc and it was messing up one of my nerves, so the goal of the surgery was to fix the disc and take the pressure off the nerve. Since the disc was putting the pressure on the nerve for so long, it really jacked up the nerve. Actually I’m still riding somewhat handicapped, because I have a pain in my leg that is still there. The back is 100 percent, it feels good, but that nerve is going to take a really long time to heal so I still have trouble getting my right leg up in corners and stuff like that.

What was the actual procedure they had to do? Was it a herniated disc that they had to fuse?
No. Here’s what they had to do: with a herniated disc, think of your disc like a jelly donut and if you squeeze the disc some of the jelly will come out. So my disc was still aligned but it had been squeezed pretty much and the jelly inside the disk squirted out and that was causing the pressure on the nerve. I got the surgery to basically take out or cut out that jelly and sew it back up and release pressure off that nerve. It wasn’t a big gnarly surgery, not taking discs out, and not fusing anything, it was a relatively simple surgery but that nerve stuff is what keeps lingering. 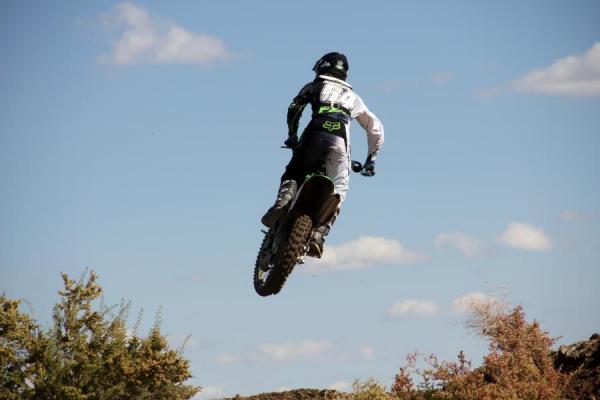 After almost a full year off the bike, Anderson is finally starting to get back into the swing of things.
Photo: Andrew Campo

So basically it was a lingering problem with the disc?
It’s kind of weird, because last year at Pala I was behind Windham [Kevin] and I was eating some roost and all the sudden some of the roost cleared up before I hit this rut and there was a gnarly pothole and I hit the pothole and it almost threw me over the bars. I didn’t think it was a big deal, my back started to get a little sore before the start of the second moto, but I thought it was just a strain. Then the next couple of times I rode after that I started to get this sharp pain shooting down my leg. I can almost guarantee it was because of that one pothole at Pala, because it knocked the wind out of me, I hit my teeth, it gave me a headache—it really jarred me pretty bad. So Pala was my last race last year, and then I did a couple of local races and went back to Pala for a little redemption. So that is kind of where it started, and it began to get more and more aggravating to the point to where I had to get surgery.

How tough was it having to sit out the entire year, basically just rehabbing and watching the races from afar?
I just feel like if I can’t race—I mean I’m a die hard of the sport, I care about it and it’s always 100 percent on my mind—I can’t settle down to watch a race on TV and see how everyone else is doing because it puts more stuff in my mind. So I have been working and doing other things to kind of keep my mind off of it and have just been plugging along and doing my own thing. The less I think about what could have been, the easier it is on me.

You made your season debut at Pala. How much prep time did you having going in?
If you put all the days together that I rode it would probably add up to two weeks. I had gotten on my bike about a month before Pala, but with work and letting my body heal from the few times I was able to ride, I didn’t get a chance to ride the bike a bunch. I just rode a handful of times before Pala and felt like I had decent speed so I figured if I could get in and qualify, that would be goal number one and then if I had thirty plus two in me I would just go out and see how I could do. I only did maybe one thirty minute moto prior to Pala, so I really just concentrated on sprint laps while I was practicing. 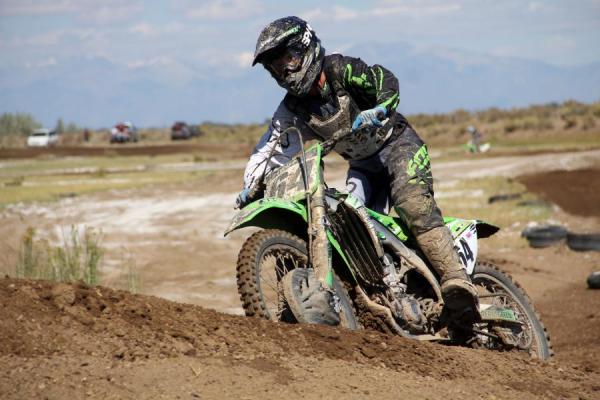 You were pretty far behind the eight-ball but you still managed to go 25-25 at Pala. You must have been pretty happy with those results?
Oh yeah. Just to get in was a goal in itself. And there were still a lot of people that didn’t think I could even ride anymore.  Just to prove some people wrong, and prove that I have the heart and dedication to do this, was probably one of the biggest things. Then to fall off the start in the first race and coming back to twenty-fifth, to me, that was amazing, and then I fell a couple of laps into moto two and to still end up with a twenty-fifth was 100 percent satisfying. I was kind of bummed out that I didn’t get a good overall score, but, hey, making it in is making it in, so that is what I was the happiest about.

You had been off the bike for quite some time and obviously your endurance wasn’t where you would have liked it to be. But did you feel like you were almost back to 100 percent by the end of the day?
Honestly I knew what to expect from racing the entire 2010 [outdoor] season. I think that helped me out in qualifying. But I was definitely not riding like myself, even in practice I got pumped up on the first lap. I was just so nervous and worrying about my own thing that it messed with me a little bit. And the endurance part, I definitely didn’t have two thirty plus two in me, that’s why I was really excited to go 25-25. In practice I got pumped up and got a little frustrated, but I drank some more water and thought about it a little bit more and got a .2 seconds faster lap time in the second practice and I think that helped my motivation a little bit for the motos.

As far as the motos go, I definitely didn’t have thirty plus two hard laps in me. The second moto on the first lap I was having a gnarly problem with getting cramps in my arms and legs, but it went away about half way through and I just did my own thing and held on from there. My endurance definitely hurt me at that race. It was definitely a smart choice to go out there and qualify—it was good for my sponsors—but it was hard to be racing thirty plus two all last year and being comfortable doing those long motos to not racing for a whole year and doing two local races and then going right to the big leagues again. It was a pretty tough change.

You weren’t really able to do much all season, and yet you still managed a couple of top-25 finishes which was pretty impressive considering you were maybe 80 percent at best…
Yeah when I’m practicing at my home track and stuff like that my sprint laps are great, but I don’t have any one around to get in my head and pump me up or a gnarly rough track, so I feel great at home. I probably feel around 90 percent, because my leg issue in some of the corners takes away from that percentage. But when you get to the races and you have all those fast guys around you it will pump you up twice as fast, and I think that was my main issue. With some injuries, like if you break an arm or something, you can still train somewhat. But when I was off [for a year] I was just a couch potato, I couldn’t do anything. So all in all I’m really happy with how I did and I’m really excited for next year already. 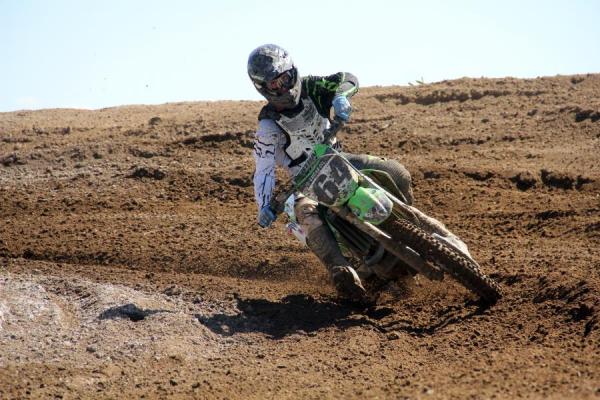 Anderson is still dealing with some lingering effects from his injury, but says he is almost 100 percent recovered.
Photo: Andrew Campo

You mentioned you were still having problems with your legs. Do the doctors feel this could be a long-term issue?
The doctor that did my surgery and a couple of other doctors told me that before I had the surgery I should feel instant relief when I came out. But I didn’t feel instant relief at all it felt exactly the same. And then a couple of months later I was still feeling the same pain and I went back to the doctors and had another MRI and they said the disc and everything looked perfect, but they said this nerve could take a long time to heal. With the nerve they said that if it is aggravated for more than a year than there is a slight chance it could be permanent. So about two or three months after the surgery when they told me I couldn’t mess anything up is when I started to get back on the bike and getting used to my leg.

What are your plans for next season?
I really don’t have the money or the sponsors to back me for doing supercross. I could probably get everything together and find some support to get me there but it’s a big stretch doing that. Ultimately I don’t care, I would work my butt off and fund my own way to the races if I had to, but the main thing for me for supercross is practice. I mean I could ride a bone stock bike and I would try to make it work as long as I get the practice. But here in Colorado we don’t really have any supercross tracks, we have a couple of arenacross tracks, but I’m not going to go do twenty laps on an arenacross track and say I’m ready. I don’t want to go into a season half-assed. I want to go in as professional prepared as I can be. So right now the big picture is to train all winter and do some local races and get ready for motocross next year.

Thanks again Derek. Who would you like to thank for helping you out this season?
Vickery Motorsports, DuPree 1 Ink, Hart Roofing, Fox, Pro Circuit, Shoei, Bel-Ray, Victory Circle Graphix, Rhino Stand, Spy, Kawasaki and a big shout out to Novik Gloves.