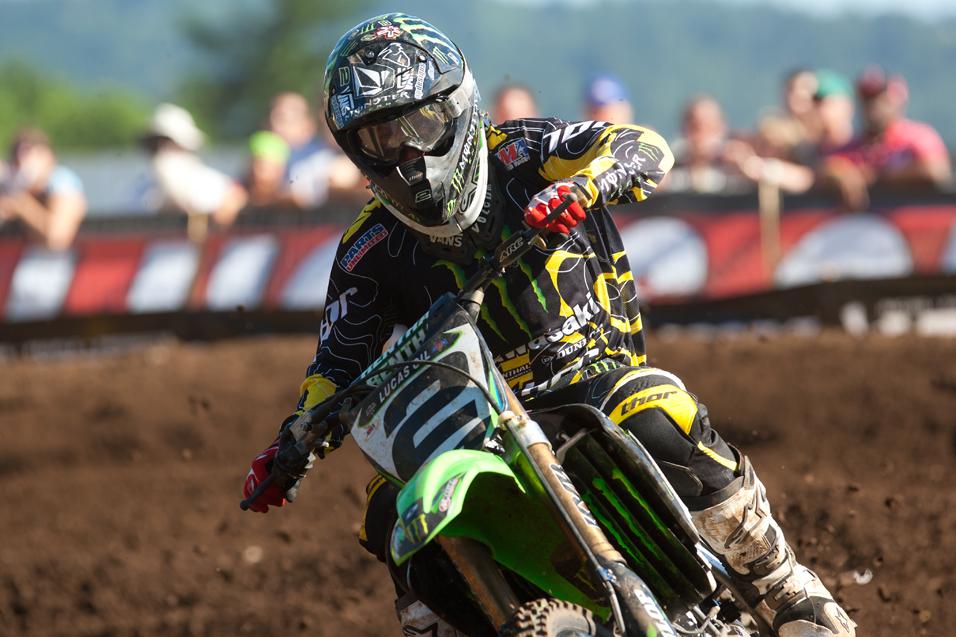 10 Things for at Unadilla

10.) I’M BACK: GEICO Honda’s Jimmy DeCotis and Rockstar Suzuki’s Ryan Morais will make their long-awaited returns to the American Motocross this weekend at Unadilla after missing the first eight rounds due to injury. DeCotis, who dislocated his elbow at Seattle, will make his debut ride outdoors aboard the GEICO Honda, while Morais, who underwent hip surgery after the supercross season, will be lining up on the gate outdoors for the first time since Freestone last year. What can we expect from these wounded warriors? Probably not much, seeing as the majority of the other forty riders have eight rounds under their belts. A top-fifteen performance should satisfy the needs of each rider, for now.

9.) DOWD AT DILLA: The man, the myth, the legend: John Dowd will return to racing this weekend at Unadilla. Dowd, who celebrated his 46th birthday on Wednesday, will break his own record as the oldest rider to score points at an AMA National if he’s able to lock down a top-twenty position this weekend. Word is there could be another surprise entry at Unadilla, but you’ll just have to tune into the live coverage on Saturday to find out. 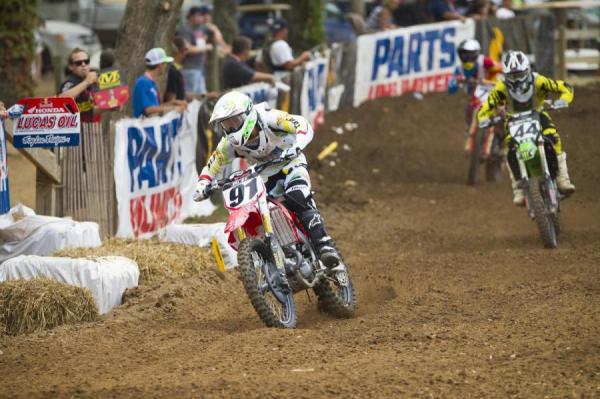 8.) WELCOME TO THE BIG LEAGUES: Hot-shot amateur prospect Justin Bogle, fresh off his Horizon Award winning performance at Loretta Lynn’s, will make his highly anticipated debut this weekend at Unadilla. In preparation for the return of Jimmy DeCotis and the arrival of Bogle, GEICO Honda has leased Justin Barcia to American Honda—to compete in the 450 Class. The other big prospect who was ready to hit the pro ranks this weekend was Star Racing’s Kyle Peters. But Peters, who took down Bogle at Loretta’s to win the 250 A title, will miss Unadilla with a small fracture of his T-10 vertebra following a crash at the Ranch.

7.) LIVE MOTOS: Isn’t it nice to come back from a long break and have live coverage of three of four motos and same-day coverage of all four motos? It’s like coming home from vacation to find that someone mowed your lawn and raked the leaves. Put the honey-do list aside for a day, take a break from the triple-digit temperatures, and enjoy more than four hours of racing on Saturday. Remember, 450 and 250 motos can be seen starting at 12:30 p.m. Eastern on FUEL TV or Allisports.com (a half hour earlier than usual), with the second 450 moto following on NBC at 3 p.m. The second 250 motos can been seen later that night at 11:30 on Speed.

6.) WILSON’S WINLESS STREAK: You have to go back to the season-ending Pala National last year to find the last time Monster Energy/Pro Circuit Kawasaki’s Dean Wilson captured an overall in the Lucas Oil AMA Pro Motocross Championship. Yet Wilson holds a 13-point lead over teammate Tyla Rattray and a 17-point lead over teammate Blake Baggett. Can Wilson take home his first outdoor title without winning an overall? Up to this point in the season, if there is any frustration in not getting to victory lane, it hasn’t seemed to affect Wilson’s performance, as he continues to light up the podium like a pinball machine. But Wilson has been chomping at the bit to capture that elusive victory and will stop at nothing to get it. Will the streak come to a halt at Unadilla?

5.) CAN REED REBOUND?: Washougal was the first time all season Chad Reed showed a little weakness. After the “crash heard round the world” at Millville, Reed looked out of sorts in the Pacific Northwest. And to be honest, who can blame him? Just surviving that crash was a miracle. Reed salvaged what points he could going 7-4 for fourth overall but lost at least a share of the red plate for the first time all season. Reed now finds himself nine points back of leader Villopoto with only four rounds remaining. This could be the first time all season Reed is feeling the heat. He isn’t in a must-win situation yet, but he can ill afford to drop any more points to the Ryans. 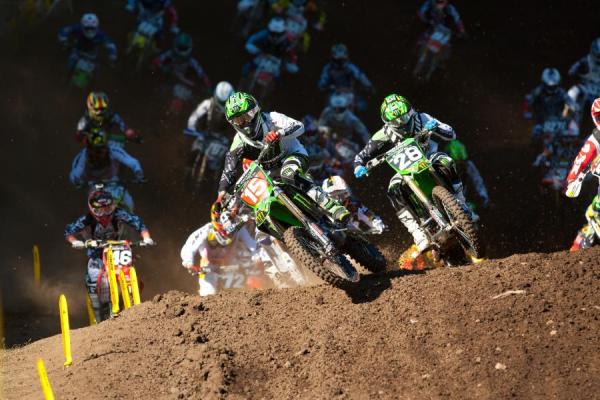 Can Wilson break his streak at Unadilla?
Photo: Andrew Fredrickson

4.) THE RYANS: Ryan Villopoto and Ryan Dungey have engaged in an all-out bloodbath the last two rounds vying for supremacy atop the motocross food chain. Separated by one meager point heading into Unadilla, “the Ryans,” as they’ve come to be known, have had more than two weeks to sit and think about what’s on the line. And let us not forget Villopoto will be debuting a new machine (more on that later). The question now remains: Who will leave Unadilla with the points lead and the momentum as we head to Southwick? (And remember, it could end up being a Chad, not a Ryan.)

3.) BAM BAM: GEICO Honda’s … er, American Honda’s Justin Barcia, the native New Yorker, makes his return home this weekend at Unadilla, and he’s got a shiny new toy to bring along with him. After the outdoor retirement of Kevin Windham and injuries to Josh Grant and Trey Canard, American Honda found itself without a rider. Lucky for them, GEICO Honda had Jimmy DeCotis returning from injury and Justin Bogle ready to hit the pro ranks, which allowed them to loan Barcia for the rest of the year. Remember, Barcia rode a 450 to victory at the Bercy SX last fall. This could be a great learning opportunity for Barcia, as Honda is probably grooming him for a move up the ladder at some point. If Barcia can follow in the footsteps of former teammate Trey Canard, who made a splash during the ’10 supercross season when he made a brief cameo appearance on the 450, he may just find himself under a different tent next season. 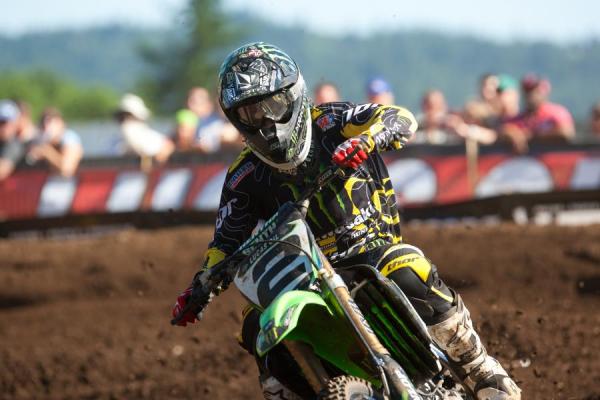 2.) GOING THE DISTANCE: With only four rounds and eight motos left in the 2011 Lucas Oil AMA Pro Motocross Championship, it’s looking like a real possibility that Monster Energy Pro Circuit Kawasaki may finish the season undefeated. The team has won all sixteen motos to date, have swept the podium in five of eight rounds (Hangtown, High Point, RedBud, Millville, and Washougal) and currently hold a 96-point gap over the next closest competitor. With the fiery Justin Barcia making the jump to the 450 class and teammate Eli Tomac failing to live up to expectations, it now seems all the pressure falls on Star Racing’s Kyle Cunningham to break the streak. Four rounds. Eight motos. Everyone else is struggling—Cunningham’s teammate Ryan Sipes came down with an illness, and while it’s not as serious as mono or Epstein-Barr, he’ll probably have to miss some time. And Marvin Musquin has been off the bike as much as on this year. Can Cunningham and company stop the PC winning streak?

1.) TO THE FUTURE: It’s 2011, but Kawasaki is so pumped on its redesigned 2012 KX450F that Villopoto and Jake Weimer are going to race it starting this weekend. Visions of Grant Langston grabbing the 2008 Yamaha YZ450F at the end of the 2007 season—and reeling off a bunch of wins and a championship—can go dancing in the heads of many. At the works-bike level of RV and JW, the biggest change for this bike will be a new, slimmer chassis. Those who have ridden the bike say it’s better than the 2011. But did the green team seriously get in enough testing time for the new bike to already be better than the race-proven (and SX-title-winning) 2011?