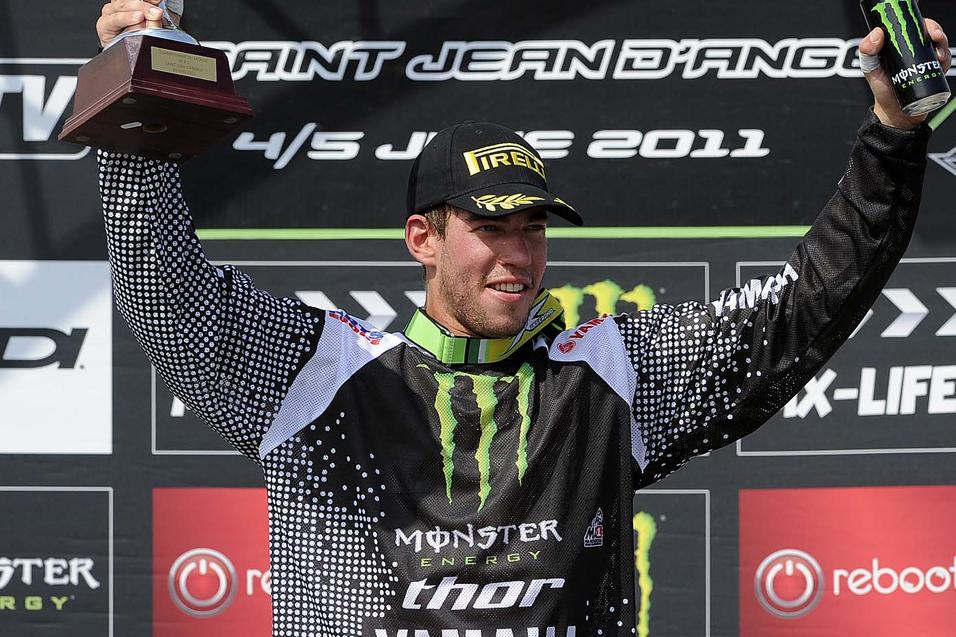 Advertisement | Advertise with Us
As one stranglehold on an FIM Motocross World Championship category was broken at St Jean D’Angely for the Grand Prix of France and the fifth round of fifteen another seemed as though it might be taking shape.

Mitch Payton will be delighted to see that his machinery is now turning-up cups on both sides of the Atlantic, as CLS Monster Energy Kawasaki Pro Circuit’s Tommy Searle unfastened KTM’s vice from the MX2 class with his first Grand Prix victory since 2008.  Hefty attendance at the open and impressive circuit witnessed only the third KTM-less podium in the last three years they saw Yamaha toast their second MX1 triumph in a row as Steven Frossard drove the partisan support into frenzy with his maiden success on the Monster Energy factory YZ450FM at just the fifth time of asking. 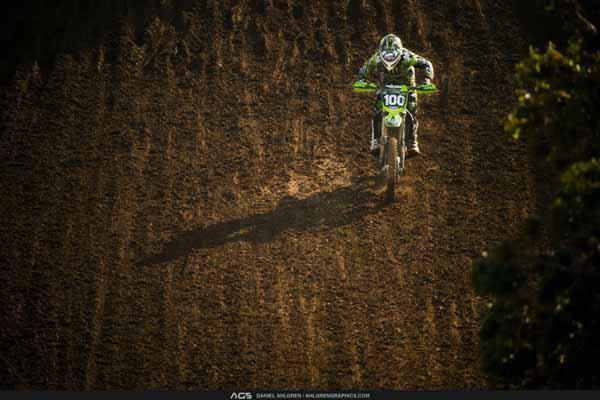 The tired surface of St Jean D’Angely was battered by freak weather, with muggy humidity on Saturday turning into a shocking flash flood and then more stuffy conditions on race-day. The cascade of water acted as perfect irrigation but the softening of the terrain did not stop many riders claiming the varying grip levels provided the trickiest layout of the season. It was not surprising to see so many errors.

Aside from the results, St Jean d’Angely entertained a significant event in at least two ways. Firstly, this was very much a ‘dress rehearsal’ for the 65th Motocross of Nations that will occur on September 18th at the same venue, eleven years after the French hillside first hosted the traditional season curtain-closer. Secondly it was the first race of six in seven weeks for a hectic trawl around Europe for the Grand Prix series. 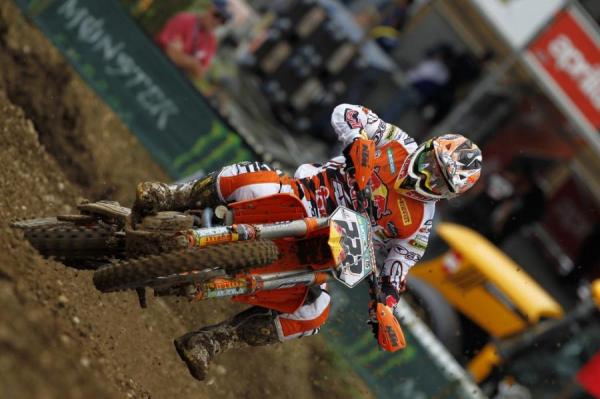 Frossard was a clear and deserved winner thanks to his first moto victory and second race flight to 2nd position. He held off attacks by team-mate and conqueror of the last round David Philippaerts (the Italian would lose the front wheel entering the final downhill turn and cross the line in 3rd) and Red Bull Teka KTM’s Tony Cairoli; the world champion also crashing in one of the several heavily rutted 180 degree corners as he embarked on one of his typical last lap charges at the end of the first moto. There was drama for pole position man and Rockstar Suzuki’s Clement Desalle who crashed twice and had to calm his desperation to climb back to 11th. Desalle reversed his fortune in race two with a dominant streak ahead of Frossard, Cairoli and the two works Hondas of Rui Goncalves and Evgeny Bobryshev. CLS Kawasaki’s Ben Townley would have had fifth overall on his first ‘serious’ return to GPs but a collision with Max Nagl on the last lap saw him hit the ground heavily. Thankfully he has nothing worse than a sore shoulder. New French Champion Xavier Boog was fourth overall on the new 2012 works Kawasaki.

“I was really focussed on my riding and for sure my goal was victory today,” said Frossard. “I was smooth and didn’t take many risks. This is my first year in MX1 and to win here at St Jean is something so good for me.”

Where were the Red Bull Teka KTMs in MX2? The 250SX-Fs of Ken Roczen and Jeffrey Herlings had owned all of the four rounds approaching St Jean but another couple of falls for Roczen and a 6th place first moto finish for Herlings meant that the podium slipped from their grasp. 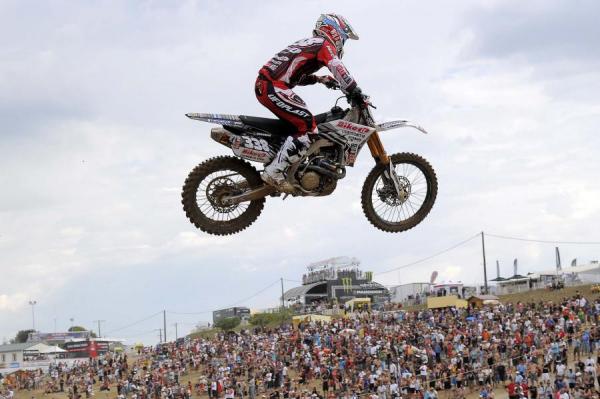 Searle – who had won at the same circuit in 2008 – went 4-1, earning his spurs from an unlikely situation and after one of the best MX2 races of the season as four riders disputed track space in the second moto.

Roczen had done his now-customary disappearing act in the first moto ahead of Monster Energy Yamaha’s Gautier Paulin (the Frenchman going on to score his second consecutive podium and first in his homeland) and the rider who would be eventual overall runner-up Bike it Cosworth Wild Wolf Yamaha’s Zach Osborne but there are signs the German’s sheen of invincibility moulded by his supercross endeavours and confidence is starting to get a bit grubby. Getting out of shape while in a clear lead on a fast uphill double on the first lap of Moto2 was an unnecessary and costly mistake. It left Osborne (riding with a fracture to his right radius) in charge but he was soon joined by Searle, Herlings and Paulin. They would finish in that order with the Virginian slotting into third spot after setting the fastest lap of the race. “When I saw him [Roczen} go down I was quite freaked out because then I was in the lead and in the driver’s seat,” Zach said. “I knew that I needed to put the hammer down quick. I was doing my best and it was the first time I’d led a race this year.” 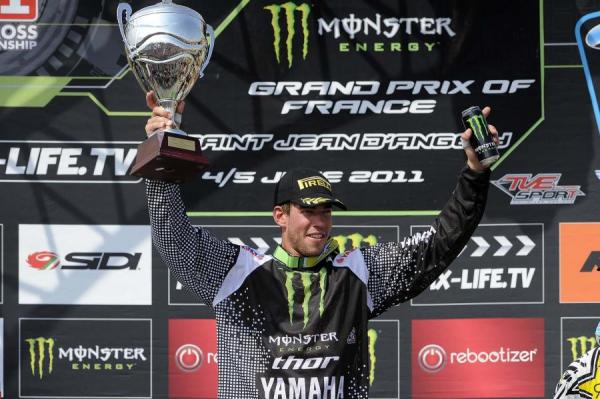 Frenchman Steven Frossard took the victory in front of his home crowd.
Photo: Courtesy of Yamaha

Roczen’s points advantage was barely dented and even though Desalle enacted damage limitation in MX1 he still permitted Cairoli to draw closer as Frossard moved into third position and just 20 points adrift.

Next up the Grand Prix of Portugal on the orange terrain of Agueda and where the chance of rainfall during some part of the weekend is practically part of the official race schedule.