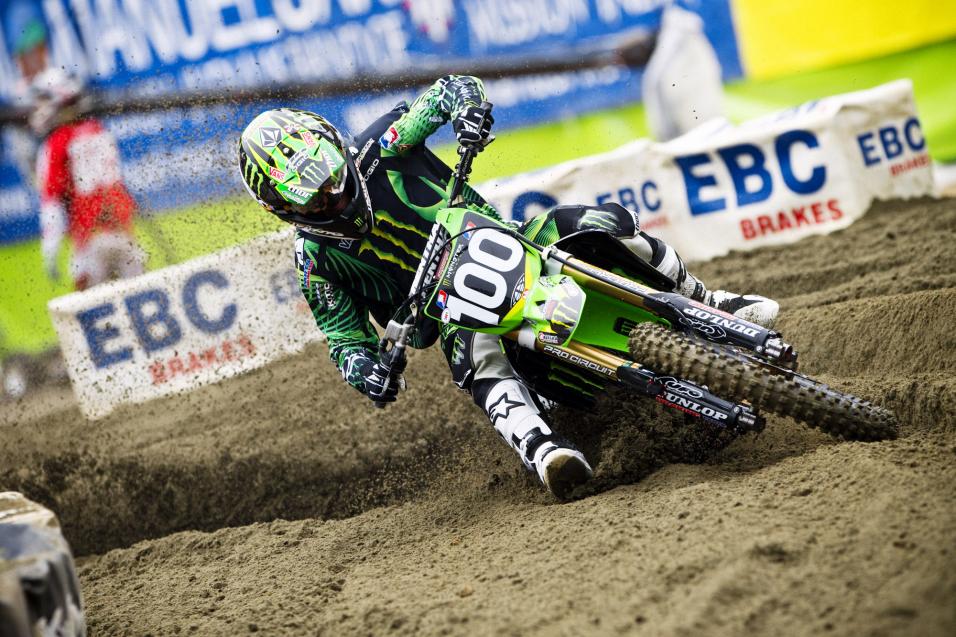 The final practice session is complete. Kyle Cunningham, fastest in session one, was fast in the second Lites session as well, and he was one of the few guys who looked like he was in attack mode. Hansen was on the gas too. While the majority of riders appeared as though they were just surviving the whoops, Hansen actually looked aggressive in them. Hansen finished the session by posting the fastest time a 46.145, on the final lap. Cunningham’s time of 46.263 was second fastest, followed by Roczen (46.952), Davalos (46.968), and Tomac (47.003).

By the time the supercross class came out for the second and final qualifying practice, the inside portion of the whoop section was starting to get pretty beat up, prompting the track crew to mark that lane off with Tuff Blox in the hopes that another line would break in. After a few laps, it became apparent that Stewart was not on the track. Apparently he got a little banged up in the first session, and opted to lay low until the night show, even though he did record the fastest time in the first session after his crash.

Another noteworthy factor is how much the times have improved from the first practice to the second. Times have improved by roughly a second, in both the Lites and SX classes, which is huge. What’s even more remarkable is that it drizzled a little between practices, creating a slick surface. This didn't work in Stewart's favor, as his fast time from session leaves him out of the top five overal after he skipped session two. His team says he will be racing tonight, though.

That’s it for qualifying here in Oakland. Make sure you keep it locked right here on Racer X Online, and follow us on Twitter, @racerxonline, for live updates on the action.