Despite a trying economic climate and an overzealous U.S. government approach to protect kids from ingesting lead, Michigan-based Cobra Motorcycles’ hard-working staff of just over 30 people did everything in their power in 2010 to keep the dreams of young motocross racers alive throughout the United States and rest of the free world.

“Two-thousand and ten will go down as a turning point year for Cobra – and a turning point for the better,” said Cobra President Sean Hilbert. “We saw great advances for the Cobra King 50 and, especially, the Cobra CX65, continued our industry standard successes at national-caliber competitions here and overseas and continued to expand upon the great heritage of the Cobra motorcycles.”

Hilbert said quite honestly that the motivation at Cobra is a direct byproduct of the effort Cobra kids put in at home and on the competition motocross tracks around the world. “If anyone around here ever starts feeling sorry for themselves, that we’re over-worked or whatever, all it takes is a weekend road trip to an amateur national or even a run down to RedBud for a local amateur race to see how hard a seven-year-old and his dad work together to reach their goals.

“Kind of puts things in perspective when you know Cobra’s got the guys’ backs,” explained Hilbert. 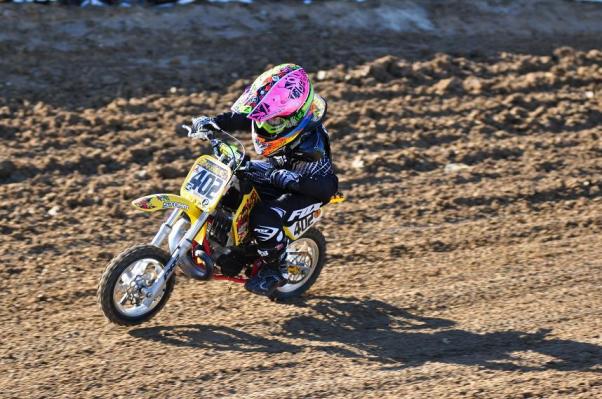 2010 championships for Cobra came at all of the major American amateur MX nationals, including: Oak Hill and Lake Whitney, Texas, Nevada’s Mini GPs, Ponca City (Okla.), Loretta Lynn’s AMA Amateur MX National Championships in Tennessee, Branson (Mo.), Arizona’s Amateur MX Open and the Mini Os in Gainesville, Fla. Cobra also again enjoyed a great deal of success north and south of the border – and overseas – as the iconic junior MX brand continues to expand globally. International championships for Cobra came in Mexico and Canada, Australia, the UK and the MX Master Kids in the Belgium, solidifying the fact the Cobras are – hands down – the finest competition mini bikes on the planet.

A first in 2010 for Cobra was the effort put forth by Illinois’ Chase Sexton, who scored the company’s first podium at Loretta Lynn’s on the revolutionary Cobra CX65. Sexton then backed that up with the CX65s first-ever major national victory when he won the 65 class at the Mini Os at Gatorback MX Park in Gainesville, Fla.

And there was Stilez Robertson - all seven years, 62 pounds and 52 inches of him – who tore it up this year, winning major amateur MX national titles at Lake Whitney (Texas), Las Vegas’ World Mini GPs and the Amateur Open of Motocross in Arizona. His effort brought his overall win total to 20, tying Cobra’s Adam Cianciarulo for the most wins ever on a Cobra 50cc bike – and Robertson still has another competition year to go on his Cobra King 50!

Those great performances where highlighted in August by the two titles that Jackson Turpin and Gage Linville secured at the AMA National Championship races at Loretta Lynn’s Ranch in central Tennessee. Both boys turned in flawless performances and put an exclamation point on both of their 2010 race seasons. Both will be back in the Cobra Camp for 2011 to contest for more 50cc and 65cc titles.

And on the ATV side of things, Cobra’s Eli Hopkins, Corey Heath and Hunter Hart all had bang-up competition seasons on their ECX line of Cobra quads cycles. Hopkins, who not only beat the competition to win the 2010 50cc AMA-ATV Motocross Championship, did so while also battling Juvenile Diabetes. Heath (ATVA 90cc Auto Jr.) and Hart (GNCC 90 Mod) both won major ATV titles as well.

Cobra’s engineers also had a banner year in 2010. For the first time in recent memory the King 50 received a full chassis and bodywork facelift. By all accounts the new look and feel were a home run, with the added benefit that both the King 50 and the CX65 were made ergonomically similar in 2010 to create a seamless transition between the two bikes for Cobra racers. And speaking of the CX65, it received an all new engine for 2010 that helped power Cobra Kids to an unprecedented number of wins and podiums.

“All-in-all it was a banner year at Cobra and for the kids all over the world running our bikes,” said Hilbert. “We came in to 2010 with a lot of questions – like is mini bike racing at the national level on the verge of extinction? Cobra, along with its great riders and families, is proud to say that ‘No, mini bike racing’s not extinct.’ And you need look no further than a dad driving home, kid asleep next to him – with his trophy – and a Cobra in the back of the truck … ready to do it all over again in 2011.”

Next up for Cobra racers is the 35th annual GNC International Motocross Final, March 15-20, at Oak Hill, Texas.

Cobra, founded in 1993, produces the most successful line of competition mini cycles and mini quads in the United States with more than 300 national titles in the last decade. Based out of Hillsdale, Mich., Cobra's mission is to build premium products for the serious racer. For more information on Cobra products, please visit our website at www.cobramotorcycle.com.

High Profile Public Relations (HPPR), LLC, is a multi-faceted communications agency specializing in strategic media relations – both industry and mainstream – for the powersports and action sports communities. Dialed in with all forms of power and action sports, its participants, manufacturers and live event promoters, HPPR’s Pat Schutte can be reached at (734) 369-2170 and pat@highprofilepr.com.