A few laps into his final practice session Roczen was involved in a crash with another rider which resulted in a badly bruised quad and forearm. He had to forfeit the remainder of practice to seek help from the medics. Roczen rested up before the heats and returned to action.

Despite missing the final practice, Roczen still held the top qualifying position and was rewarded first gate pick in the second Lites heat for his efforts. He had a bad jump off the gate but that was the only negative about his heat. He rounded turn one in 15th and quickly jumped to 12th and soon into the top ten by the end of the first lap. It was at this point that the massive crowd looked in their programs and memorized the name of the newcomer on the #194 orange race machine. The crowd was on their feet watching Roczen fly by one or more riders per lap to eventually put his KTM into a good 4th place qualifying position.

Roczen tried his best to rest between his heat and the main event. “It is my first time riding at this time of night and with my earlier crash I was feeling pretty tired heading to the main. It made me tighten up which hurt me off the start and in the first few laps,” remarked Roczen. 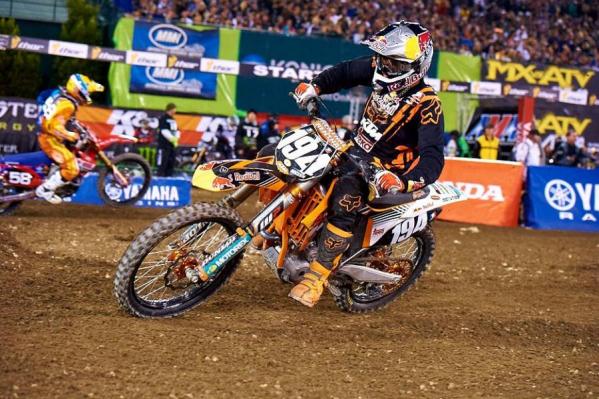 In the main event, Roczen started near the tail end of the pack and rounded the first turn around 15th. Roczen jumped past a handful of riders and into 10th position within the first few turns. The next lap he moved into 9th and soon was sitting behind Nick Paluzzi. His fast lap times helped him quickly close the gap to Paluzzi making the pass right before the finish line on the fourth lap. A few turns later Roczen made a mistake and washed out in a turn. He recovered after losing two positions.

Another lap and he had passed back into 8th and again had Paluzzi in his sights. He spent two more laps reeling him in and then made the pass stick around the halfway point. He began to close on Ryan Morais near the end of the moto but fell short on time. He ended his first race in a respectable 7th. A great finish for a rookie in his first Supercross race.

“I did have higher expectations coming into this race. I felt that I should have been within the top five. Reflecting back, I am still satisfied with my result because I am safe and able to return for Phoenix. I will use this race as motivation during the week to train harder and work toward a finish within the top five,” stated Roczen.