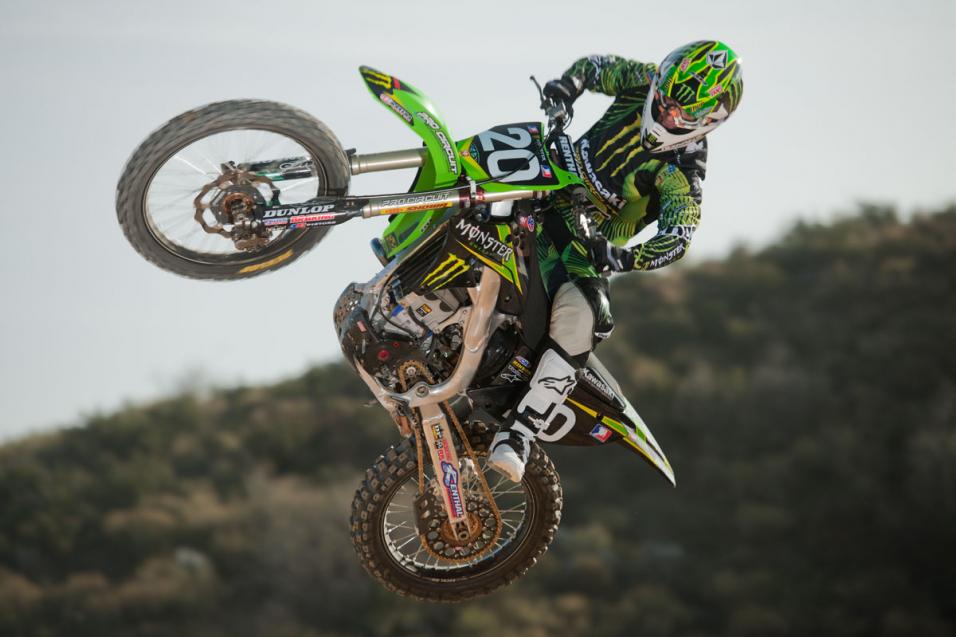 On Friday afternoon, as the rain fell down upon Pro Circuit Racing in Corona, California, team boss Mitch Payton was looking over a batch of heads. While doing so, he talked about one of his new riders for the 2011 Monster Energy AMA Supercross Series – namely Broc Tickle. A member of the DNA Shred Stix/Star Racing Yamaha outfit in 2010, Tickle strung together an impressive season in the six-race AMA Supercross Lites West Region Series, placing inside the top six in every race but one, as well as winning a race and finding himself on the podium on two other occasions. Seventh in the 250 Class in Lucas Oil AMA Pro Motocross Championship, Tickle, despite a number of undesired trips out of the first turn in the back of the pack, rode hard and showed grit and speed to a point that Mitch Payton took absolute notice of him and tracked the 21-year-old native of North Carolina down and put a contract for the 2011 season before him. A few off-season legal struggles with his former team notwithstanding, everything was ultimately sorted out and Tickle signed on to become the final member of the ’11 Monster/Pro Circuit/Kawasaki team. Present at Pro Circuit on Friday to take part in a photo shoot for team sponsor Alpinestars, Tickle sat down at a table with engine parts and gaskets strewn upon its surface and talked to us about his new team and his place within it.

Racer X: Broc, when did you first start coming over here and working with the Monster Energy/Pro Circuit Kawasaki team? I believe you had a little bit of a contract issue that had to be resolved and that held things up a bit…
Broc Tickle: Well, I had an issue going on there for a little while, but I think it was more about trying to scare me to stay where I was at. It ended up working out, which is what I wanted. I’m glad I’m here and everything is working great. I can’t complain at all. I was kind of bummed there for a little while because I didn’t think I was going to be able to take the opportunity, which would have been a heartbreaker for me. I’m just glad it worked out.

In the 2010 AMA Supercross Lites West Region Series you started the season with a sixth at Anaheim, a fifth at Phoenix and a tenth at Anaheim II. At San Francisco you landed on the podium and appeared to really pick it up from there. You placed second at Anaheim II and won your first race at Seattle. How did you feel about your season?
It went better than it ever has. It was a good stepping stone for me and that what was good about it. And it ended on a good note, obviously. I had a couple of bad races here and there and those fifths and sixths were good rides, but not a good start. There were errors here and there that I could have been better on, but I also won my first heat race and my first main event, too, so that was cool.

There were some very good riders in your class – Jake Weimer, Trey Canard, Wil Hahn, Josh Hansen – did you know you had a main event win in you?
I knew it. As soon as the break started up [after Anaheim III] started up, I was like "I’m winning Seattle." It just got set in my mind. We went there and the heat race went like crap. I then went out and started the main event in sixth and somehow I worked my way to first and then just rode my own race. 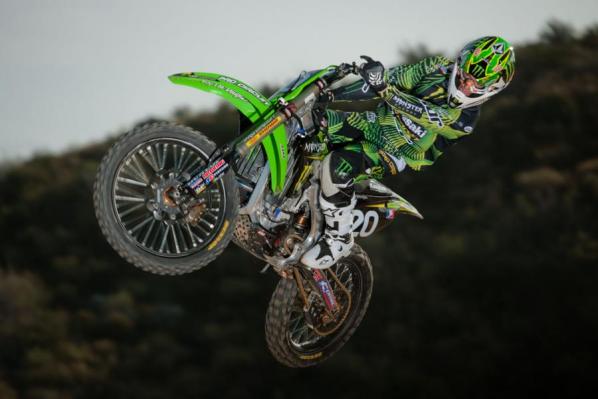 So you had to pass a number of guys to get to the front…
Yeah, actually it was weird, though, because it was so rutty and so soft. I was actually in sixth when we came around to the first section and then after the first set of whoops I came around and I was in second already. So I kind of went for it in the first part of the race and passed [Blake] Wharton and kept on sailing. Wil Hahn was actually keeping me honest there for a while. I don’t know… Something about that night – I was so relaxed and everything was going perfectly. It was just one of those nights where I felt unstoppable.

How did it feel to stand atop the podium?
Honestly it didn’t sink in for a long time and that what was cool about it. I didn’t realize what I did until long after the fact. I really want to have that next one. It’s addicting. Once you get it once, you want it again, you want it again… It probably doesn’t stop.

Mitch told you really want to win. Do you think there are racers out there that who, down deep, really know they don’t have a chance at winning?
Yeah, for sure. There has to be because all of us are great riders. You can’t tell me that whenever we were on 60s that all of us were saying "He was better than me" or "I was better than him." It doesn’t matter, you know what I mean? It all comes down to the same thing: if you don’t have it in your head that you’re going to do it and that’s what you want then you might as well pack up and go home.

And I would assume knowing that you can win would make you want to work harder. What I mean is that you start thinking, "I know I can do it so I’m going to keep working harder to put myself in a position to win."
Well, here’s the thing. Obviously Seattle was my first win. Before that I was top ten. So it was kind of like when I was finishing sixth, seventh, fifth, eighth, I thought, "I can win." But until you believe you can win it’s not going to happen. That’s what it all comes down to because I was like, "I don’t know why I’m not going out there and winning." You just have to know and can believe you can do it. Confidence – that’s all it is. I’ve obviously been "back there" and I wasn’t the guy that came into pro racing and just lit it on fire like a lot of these younger kids have. I was there, but I wasn’t on fire. It’s definitely good that I’ve kind of taken my time. I think some guys had their moments. Some guys are supposed to come in and win right away. Some guys take a couple of years before they win races or championships. 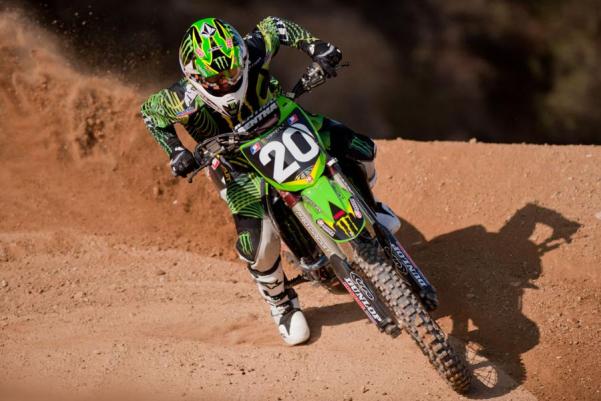 Johnny O’Mara recently told me that he really likes your technique on the bike and that you have a lot of potential and that you’re something of a sleeper. Do you feel like you’ve been a sleeper in your career?
Oh yeah. I always have been. My first podium at Loretta’s, like, nobody knew who I was. In the first moto that I came out and won and people were like, "Who the hell is Broc Tickle?" That’s how I’ve always been. And as soon as I did that my name kind of came up there, but I was never "that guy" in amateurs that was like "Oh, man, that guy is gnarly." I was the guy people would see and say, "Oh, Broc Tickle is up there." It wasn’t like "Josh Hill is winning!" It was more like, "Broc is doing good." I wasn’t expected. That’s what it comes down to and I think that’s cool.

All along, is Monster/Pro Circuit where you wanted to be?
Oh yeah. I mean, who isn’t a little kid or who is at Loretta’s or whatnot who wouldn’t want to be here? This is what we all look up to; we’re all like, "Oh, Monster Energy/Pro Circuit!"

When did you find out you were wanted over here? Did Mitch come after you?
He called me right after Texas this year.

The Freestone National?
Yeah, I had a good moto. I got second in the second moto and I think that really opened up some eyes. It was hot and demanding. I think it just opened Mitch’s eyes and he was like, "Oh, now I know I really want him." Right after that Sunday he called me and said, "I want you in my office on Monday morning."

How did that feel?
Oh gosh. I was just jittery the whole way here. When he called me he actually said, "Hey, we have something to offer you." I didn’t even know what to say. Just to be wanted somewhere like this. You know… It’s the best. I get goose bumps when I walk here. I go out there and look at the truck and the number one plates on it. It’s all almost like a dream. I’m here and working hard and ready to go.

"I get goose bumps when I walk here. I go out there and look at the truck and the number one plates on it. It’s all almost like a dream."

What do you think of your teammates? There’s a hell of a lot of personality around here…
Oh yeah, definitely. Tyla [Rattray] and I are pretty similar. Dean [Wilson] is funny. It’s cool because everybody here works hard and you can see it. You have Hansen over there cracking jokes at the test track and just making it fun. It’s actually cool, like it works out good. You have serious guys and you have serious guys who like to have fun. It all makes it more enjoyable. It’s definitely cool.

Last time I was out at the Kawasaki test track, I was watching you guys with Grant Langston, who rode for the team in 2005 and 2006. Langston said to me, "You know when I was here and we’d all be out here testing, everyday was like a race. Nobody wanted to be the slow guy." Have you picked up on that vibe?
Oh yeah. Definitely. I wasn’t used to that. It took me a little while to actually get used to that. Honestly, as soon as I’d go on the track, there were three or four stopwatches on me. It was putting a lot of pressure on me. At first it was pretty tough but now it’s been two or three months and I’m used to it. It’s definitely not fun to be the slow guy on the track. I think the team this year will be really good. I think there will be a couple podium sweeps, for sure. Everybody has got speed. [Blake] Baggett has a lot of speed. Hansen is ridiculous. You know that as well as everybody else. His talent is just unbelievable.

Do you have a preference of what Region you’d like to ride in 2011?
It doesn’t really matter to me. Either way. My goals are the same.

And what are your goals?
I’m going to go race by race, but my goal is to win races and to win championships and that’s what I’m going to do. I mean that’s all there is to do. 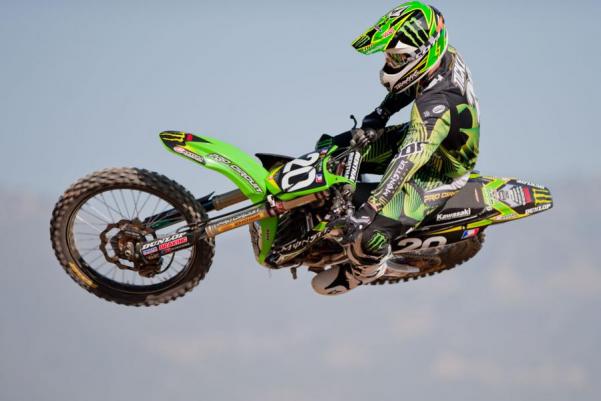