On October 29, 2010 – the day before round three of the 2010 Monster Energy Super X Series at Aurora Stadium in Launceston – I called Josh Hansen down in Australia and we knocked out a comprehensive interview. During the 30-minute question and answers session, Josh dropped a few swear words and made a few observations that set off a fireworks show of an interview. It took a few days to get things smoothed over and for the smoke to clear, but all is well that ends well. And Josh Hansen has been doing very well Down Under. Last Saturday in North Harbour Stadium in Auckland, New Zealand, the American won his first round of the Australasia series, and in doing so opened up a 32-point lead over closest rival Jay Marmont (225 points to 193). With round five set to run this Saturday in Carisbrook Stadium – known, for some reason, as "The House of Pain" – Hansen plans to keep his drive for the championship alive as the series now begins to make the bend and head down the final stretch to the wire (have to love that old horse racing cliché’). This afternoon, we rang up the Monster Energy/Pro Circuit/Kawasaki rider to see how things were going down on the upside. And away we go…

Racer X: Hey Josh, it’s Eric Johnson. How are you doing, man?
Josh Hansen: What’s up, Eric? I’m good. I’m just chilling right now. I was about to go for a run. I was going to do a little running near the beach. It’s hot as – uhm - it’s really hot out here.

Hey, you can swear while we do this, but I’ll leave the swear words out this time. I know I got us both in some hot water with bad words in our last interview.
Oh yeah. Are we doing an interview right now?

Yeah we are. I should have shown better judgment in typing up the last one…
Yeah, it’s all in the past. It’s all good. So we’re good; we’re good.

Man, I’ve had a hell of a time tracking you down. Your publicist down there, Sue Perry, told me you lost your phone.
Yeah, it wasn’t too good. I was pretty bummed. I went to that whole Melbourne Cup thing and I lost my phone and somebody swooped it quick. The iPhones here are $900 bucks, so people take advantage of it when they find an iPhone.

How are things going? You’re four rounds into the Monster Energy Super X Series and leading the point standings. Are you still feeling good down there? Are you comfortable? Are you homesick?
Yeah. It’s weird. I’ve been making it happen and it’s been good. I’ve been really sick, though. I haven’t been able to get rid of being sick. I don’t know what’s wrong with me. I’ve been riding good. Last weekend was a little scary because they have the four main events (Note: At the Auckland, the promoters utilized the "Survival Format" which featured four six-lap "main events") and they count each race as points. Basically you have to put four good races together and you have to count on trying to get four good starts. There isn’t a lot of time to do a whole lot out there. You have to be really precise on everything so it gets a little stressful. And the tracks are pretty narrow, so if you get a bad start it’s really hard to get through the pack and stuff. I ended up getting all the holeshots, but in the last one – the fourth main event – me and [Daniel] Reardon almost went down so I came from like 15th and made my way up to third. It was good. I can’t complain. Maybe I was a little greedy about not winning all four, but that’s a personal goal of mine: I want to win every race. I think each weekend I’ve gotten better and better, but man, I just need to get rid of being sick so I can really, really feel better fitness-wise. It’s really been holding me back. I don’t know… I feel good on the bike and I’m definitely getting faster and faster every weekend. So I just really want to shape up so I can just kill it these last two or three rounds. 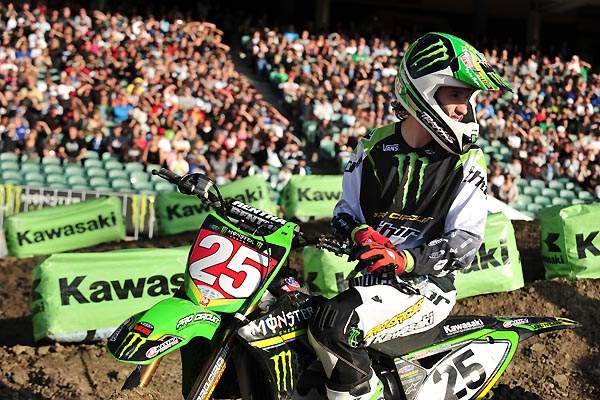 Do you have a cold or something? I can totally tell your sick…
Yeah, I don’t know. I don’t really know what it is. I had the flu. I haven’t really said anything. I’ve been racing the last two races feeling pretty bad. I don’t really know what it is. Yesterday I couldn’t even talk, but today I have a little bit of a voice. It just sucks. It just holds you back so much. I want to run. Today is going to be the first day I can really do something kind of off the bike. So I’m just kind of cruising. I fly out tomorrow morning for New Zealand.

Downshifting a gear, Chad Reed won the opening round of the series; Kevin Windham won the second round; Justin Brayton won the third; and now you’ve gone out and won the fourth. Was it a good feeling to nail down that first victory down there?
Yeah, it felt good to win. I’m a little bummed I didn’t win when the Americans were here. I felt like I could really make my mark and beat Brayton and that. Yeah, I felt like I rode good this past weekend. I rode good and did what I had to do. I just want to keep building each weekend. I just want to come out strong for this next year. I want to win the American title. That’s a really big goal of mine. That’s is the plan for myself: To make that happen.

Whether it be Mitch Payton, the other guys on the Monster Energy/Pro Circuit/Kawasaki team, your dad, or other people close to you, everybody is really pleased and impressed with your consistency and just how you are stringing this series together. Are you "feeling" that?
Yeah, definitely. I think I have to practice being consistent because when I go back to the States, this Lites class isn’t that many rounds so you really do have to be consistent to pull a championship together. It’s good and bad to say that it’s taken me long enough but I think I’ve matured a lot. I kind of understand what I have to do and tell my body what works for me and what doesn’t. I feel like that’s been helping me a lot. I also like I’m pretty mentally strong right now. At the races, I’ve been just really trying work on my starts and riding smooth and putting on a good pace. I’ve been the fastest guy a lot and that’s been good, but I’m just basically putting good laps together and being consistent. I feel like that’s really helped me out a lot.

I went out to the Kawasaki track the other day. Villopoto, Weimer and virtually the entire Monster/Pro Circuit team - Rattray, Wilson, and Baggett - were out there testing away. You could definitely feel a little bit of tension and the mechanics were trashing away at trying to build bikes and the riders were trying to put in as many laps as they could. Is it kind of refreshing that you don’t have to be out there and that you’re down in Australia and actually racing?
I definitely like kind of doing my own program. Being away from all that is good. You get tied up in all that. All those guys are good guys and stuff, but especially with our team – and we have a couple of new guys on our team – everybody tries to one-up everybody and try to show how sick they are on a dirt bike and how hard they work. I don’t care about that stuff. I just want to worry about myself and my goals and what works for me. I think this Australian thing has really been a good opportunity for me. I didn’t really think it was going to be as good as it has turned out. I’m really stoked it worked out. 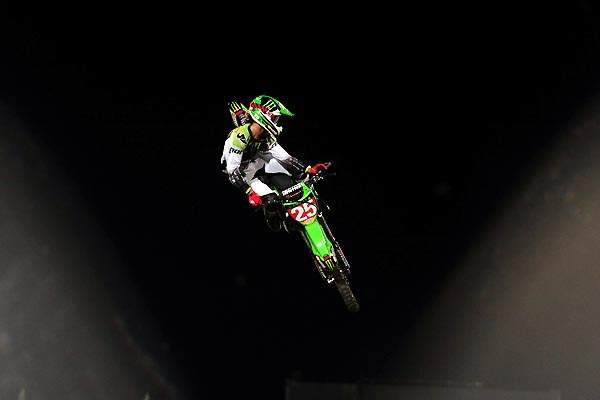 The last round down there is on December fourth. Soon thereafter comes Christmas and as all of us involved in this sport know, after Christmas and New Year’s Day, it’s on – it’s time to go racing. So if I’m seeing it the right way, you’re literally racing your way into the new season, you know?
Each year that I’ve raced I’ve always kind of gotten burnt out for some reason and never been too pumped on like having to put a full season together. I was just thinking about it the other night. I was thinking about how stoked I am and how good of a feeling I have and how good of a spot in life I am right now. I’m enjoying riding my dirt bike, I’m enjoying my team, I’m enjoying Monster putting everything together for me. It’s really fun for me and when I’m having fun I think I ride really good. I’m stoked to be doing a different program. I really don’t feel stressed out. I’m really, really, really looking forward to doing this series and finishing it out and going straight into another series. I think I’m going to be well prepared. I think I have a good mindset going into this and really feel like I have championship in my corner.

Upon arriving home and heading into Anaheim I, would you rather go ride right into the West Region or wait for the East?
I think I’m going to be ready for either or. If Mitch wants to send me West, I want to win West. If he sends me East, I want to win East. I’m pretty easy with anything. I guess whatever Mitch says it what I’m going to do. I’m pretty open to anything. I think I’m going to be well prepared. I’m excited. I’m happy. It doesn’t matter to me.

Speaking of Mitch, he goes into the AMA Hall of Fame this weekend in Las Vegas. We’re all going over there. Anything you want to say about him?
My dad, I actually talked to him a couple nights ago and he’s going over there, too. He’s going over with some of the JT guys from back in the day that helped him out with gear and stuff. I think it’s rad for Mitch. I think it’s pretty cool he’s getting acknowledged for something so big like that. He’s one of those guys that has definitely taken our sport to a different level. There are a few dudes that have really elevated our sport and I think he’s been one of them. Even though maybe he hasn’t been on the racer-side of things, it’s amazing he’s a guy who built bikes and what-not and has built the best race team out there and has been recognized for it. All props to him. He definitely deserves it and it’s pretty cool to be a part of his team. 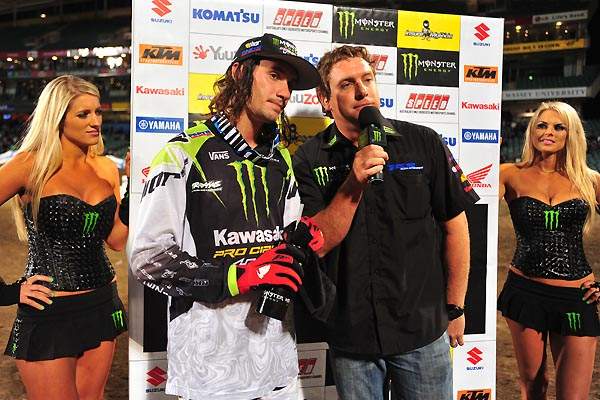