The former Olympic gold medalist, Wheaties cover boy and more recently, reality show star, brought his potential son-in-law, Scott Disick out to the Metal Mulishacompound in Temecula, CA for the filming of E! Entertainment’s world-famous reality show, "Keeping Up with the Kardashians."

Here’s a sneak peek and photo of the Kardashian crew mixing with team Mulisha.  We’re happy to report there were no broken bones, scars or stitches from the outing – only bruised egos after the Jenner vs. Disick truck race. 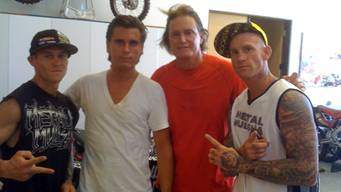