Monster Energy/Pro Circuit Kawasaki’s Tyla Rattray scored his second AMA National win of the year at Southwick, where he won a moto last year. However, for the second time this year, his win also came with a 2-2 score. We caught up with the new father a few days after the event to get his take on it all.

Racer X: Tyla, talk about that day – how you felt, what could have been better, what could have been worse.
Tyla Rattray: It was, for sure, a good day for me. I went 2-2 for the overall and was really hoping for a 1-1, but what set me back there were my starts. My starts were terrible and by the time I got into second, the first two guys were quite far ahead so I had to push really hard. I used quite a bit of energy in the first race to try to get around Trey [Canard]. I was beat a little bit for the second moto, but I wasn’t too bad. I managed to get into second then tried to hunt down [Justin] Barcia. I waited for probably 10 minutes to go and then I came around and saw the two-lap board, so the race went by so fast. I tried to go for it the last two laps, but we hit lapped riders and I got held up a bit, so that put an end to that. My main goal is to win the overall and be up on the podium every weekend. To go 2-2, I was pretty consistent with those conditions, and it was so sandy and the track was so rough that it was pretty easy to make a mistake and crash, so I was happy to be on top of the podium. It was the same day my daughter was born, so it made it extra special.

What does that do to how you look at race day? Normally, I know you guys want to be really focused and stuff, but now all of a sudden you’re a dad and everything else...
Obviously, I knew it was going to happen anytime soon because the due date was on Thursday. I had a funny feeling it was going to come on race day. I actually spoke to my fiancé before the race and I was like, "Maybe she’s waiting for daddy to go 1-1 at Southwick or to get the overall win and then maybe she’ll come out." But then she came out that morning and it sucks that I wasn’t there, but I guess that’s life. I’m just happy that she’s a good, healthy baby and that’s most important.

When you went out to practice, I saw a picture of duct tape on your back and it said "dad" on it. That’s kind of what I’m talking about; was it harder at all to focus on the task at hand knowing that you just became a dad?
No, not really. When I get behind the start gate, I pretty much think about racing and I don’t really think about other stuff like that. I mean, I wish I could have been there for the birth, but when you get behind the start gate, your mind is like in another zone. You know you’re to be racing and you’ve got to be smart when you race; especially on that track. The chances of crashing are really high and it’s really easy to have a big one. I was just looking forward to getting back home after that second race. I pretty much just made my flight. I had to leave straight off of the podium, to the truck and change everything then pretty much to the airport and I just made it. I went through security and then our plane was boarding, so I walked straight on. So, it was a bit of a rush, but I’m just happy to get the win. It’s been a long time since Mt. Morris, when I had that number-one trophy, and hopefully I can get another one before the season ends.

Talking about Mt. Morris, you went 2-2 there also...
Yeah, I know. I’m going 2-2, 2-2... At the end of the day, it’s the guy with the most points that wins and that’s really what matters is the overall. I want to go definitely try to push for a 1-1, and if I can’t do it this weekend, I think my chances are pretty good at Pala. I think it’s going to be pretty warm and the track is going to be really rough. That’s my kind of track. We’ve got two more rounds left and I think I’m like one point in front of Dean [Wilson] and 35 points behind Christophe [Pourcel], so the championship is still pretty close. Anything can happen. There are still 100 points available and I’m only 35 points out. At the moment, I still have a shot at the championship, but I just have to race every race. I’m working on my starts so I can get out of the gate good and be out front and race for the win again. 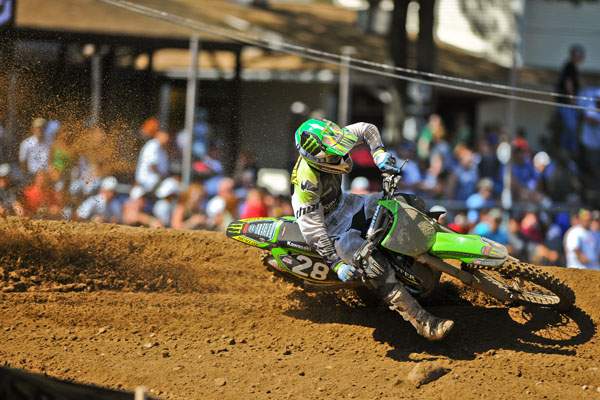 Tyla Rattray won his second 250cc National of the season at Southwick, where he was predicted to be strong.
Photo: Steve Cox

So, the last couple days, have you been doing your normal regimen or are you spending more time concentrating on hanging around with your daughter and all that stuff?
Yeah, I’ve been keeping everything the same. The only thing now is that I’ve got a little daughter in my life. I’ve still been doing my training and I just got back from riding now. So, I’m still doing all of my work I was doing before she was born. Obviously, now when I get back from riding I can have chill-out time with her. You can’t really play with a newborn yet, but anything she pretty much does is sleep and eat and does some poops. I’ve changed a diaper, which is pretty interesting...

Yeah, you’re a big, tough guy and you’re all changing diapers... What’s that about?
I know, dude. But, it’s cool and it’s been a lot of fun. I’m 25 now and I just had my first child. I think I’ve got a lot more years in my racing, so I think it’s good that I started a family around this age. I’ve been with my fiancé for like 6 years and we also knew each other a little bit before we started dating. It’s all good, and I’m happy I made good decisions in my life, coming out and racing in America and being on good teams and working hard. Life is good.

Pourcel struggled at Southwick last year, so I asked him if he liked sand, and he said he does. He said, "Ask Tyla!" What does that mean?
Yeah, Christophe is a good sand rider. I think maybe he was just a little bit worried from last year. That track at Southwick is actually really easy to blow your engine up. If you’re not riding good and you’re revving it a little bit more than what you normally are, it’s pretty easy to blow your bike up there. I think what happened there last year there with him is he was riding a little bit conservative. I know at Steel City he’s going to be good. He was good there last year. In 2006 or 2007 when he was World Champion, he won in Lierop and I was leading the whole way. He just kept behind me the whole race, just following my lines, and like with one lap to go he passed me and put down like a qualifying lap and he won. I was so mad. I still tease him about that and he just starts laughing. I think that’s why people call him the "Crafty Frenchman."

Yeah, he’s done that to a few guys this year, too. He waits until the last lap or two laps to go and then just zaps somebody and they thought they had him covered.
Yeah, he was good. He did what he had to do. Obviously, in the first race [at Southwick], he crashed right in front of me and lost quite a bit of points to Trey. Second race, Trey had his problems and Christophe got a third. If you’re third in every moto, you’re pretty much going to be the champion. So, he did what he had to do and he still got 13 points or whatever. I think he’s going to one of his favorite tracks down in Steel City so I think he’s going to be good there. We’ll just see how it is. This is motocross and people know anything can happen. Hopefully everyone stays safe and it can be a good championship.

I think the deadline passed for entry into the des Nations, but did anything change or is anything going to change with the team? Or are you guys done?
I don’t know what’s happening. I got an email from the FIM, so I’m not 100-percent sure what’s going on or if we’re racing yet. I don’t really have a clue. I haven’t gotten an email from anyone at the federation, so I still don’t know what’s going on or if we’re racing or not racing. The last email I got said that there will be no team for Motocross of Nations. I heard they’re trying to put a team together now, but I don’t know where they’re going to get the money because they said they don’t have any budget for the Motocross of Nations for us. We’ll just have to wait and see. I really wanted to race that race. It’s the biggest motocross event of the year and to race for my country is really awesome. We’ll see if they can organize some funds for us to get there.

One more thing, speaking of the Nations: Grant Langston officially retired a couple days ago. A lot of us probably saw that coming with the way his season was going and his eye problem and this sort of stuff. Is that somebody that you looked up to at all when you were coming up, coming from the same country?
Yeah, I wish Grant all the best with his new career or whatever he’s going to do. The guy has done so much in this sport. He’s won so many championships. He won a World Championship, came over here and won two Supercross championships, won an outdoor championship, won a 450 outdoor champsionship... He’s won pretty much every championship you can think of besides a 450 Supercross. I just won a World Championship and if I can accomplish what he’s done, I’ll be super-happy with that. I think it’s great what he’s done when you see what he came from. His background in South Africa was pretty similar to mine. All I want to do is wish him all the best in his new career and I’ll definitely see him around here in California and at the races and everything.