Monster Energy/Pro Circuit Kawasaki’s Dean Wilson is enjoying a remarkable rookie season in the AMA Motocross 250 National Championship Series. The Scots/Canadian/Californian is throwing knuckles for a top-three spot in the championship fight, and has also won an overall event this year. Last Saturday at the fabled Unadilla circuit, #108 wound up third overall, despite getting totally taken out for the lead by wild-riding, take-no-prisoners rival Justin Barcia in the opening moto. In Corona to swing by Pro Circuit, Racer X grabbed the happy-go-lucky kid and asked him about his dog-day afternoon in Upstate New York.

Racer X: Dean, you ran third overall in New York. You can’t be too bummed at that, huh?
Dean Wilson: No, I’m not really super-bummed on the day. To be on the podium, I’m always happy. I just think I should have had a better finish; but for crashing and everything, third isn’t bad.

Obviously, Justin Barcia has earned a dubious reputation for running roughshod over other riders. I understand there are two sides to every story, though; you think he cleaned you out, but I think he says he had the inside and you didn’t let off. What really went down? Enquiring minds want to know...
Yeah, it’s always the excuse that he had the inside or whatever, but I really don’t care. It’s the second time he’s cleaned me out. The first time [Atlanta Supercross], I was pretty pissed, but whatever; I let it go. This time, I mean, I was winning and I was actually riding decent, then I crashed and then it just totally ruined my race. I was pretty pissed after it, but I just forgot about it, came out second moto and I beat him, so that’s all that matters. He beat me in the overall, though, which sucks.

That’s the second time that’s happened to you this year, where you’ve been literally knocked out of the lead, both by guys on the same team... The first one was when Trey Canard knocked you off the track at RedBud.
I know. Trey’s was a really aggressive pass, but I don’t think it was dirty. This one was just dirty because he was going in there wide open and I had no chance. But whatever, I’m just going to forget about it.

Is it better to forget about it or is it better to save it up and know that next time you owe him?
Well, he’s got that reputation, so it’s not like I’m going to go over there and fight the guy. I mean, everybody knows he’s a dirty rider and it’s like, whatever. Payback sucks.

Are you going to paint your face all half-blue and go after him?
Yeah, we’re going to go "Braveheart." I’ll have a "Freedom" butt patch and then I’ll have some ginger hair running out the back of my helmet. That should be good. Maybe tartan gear... 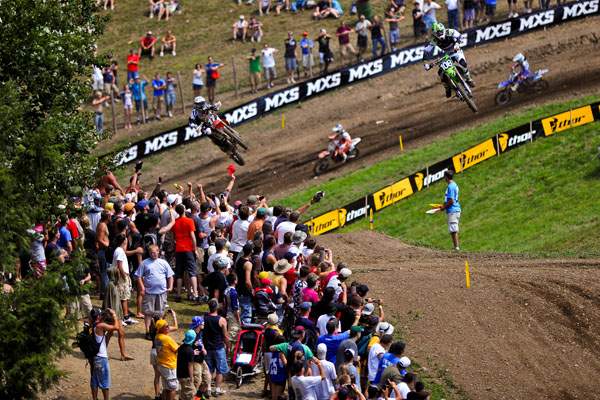 Do you know what your actual material is?
Yeah, they have a Wilson tartan. I actually have a kilt at home.

Yeah, but you’ll have to do that before the des Nations then because you have to be a true Scotsman if you’re going to race for Britain, right?
I’m not scared. I’ll do it. Just free-ball it...

That takes us to this: Early in the year, you were juggling back and forth if you were going to ride for Canada or Great Britain, and you didn’t know what you were going to do. But now, you’re going to end up riding for Great Britain. How did that play out in your head and how do you feel about that decision?
I’m really happy about the decision. It definitely wasn’t an easy one. Team Great Britain had been calling me for a couple months. It was tough. There’s a lot of politics on the Canadian side and things just didn’t really work out. It sucks because I kind of owe it to a lot of people in Canada because they helped me out and stuff. At the same time, I was born in Scotland and that’s where I lived and learned how to ride a dirt bike. I’m so glad to ride for them and I’m looking forward to the future and this year.

Who are your teammates again?
I’m not sure yet.

There are a couple other Scotsman that go pretty fast, right?
Yeah, Billy Mackenzie is pretty fast. Shaun Simpson is fast. Stephen Sword is fast. There are actually quite a few.

You guys could actually have Team Scotland.
Yeah, we could. The little island is actually pretty strong.