Three races down, nine to go. We’re only a quarter of the way through the 2010 Lucas Oil AMA Pro Motocross Championship, but it’s already starting to look like we may have a two-horse race for the 450-class championship between Ryan Dungey and, well, maybe himself.

You can argue that it’s way too early to make that kind of statement, but let’s look at the facts. First, it’s crazy to look back at Dungey’s results from Hangtown: 10-6 for eighth overall. What the hell? Of course, everyone immediately jumped to conclusions after that. He was he worn out from the sixteen-round grind of AMA Supercross. He was better on a 250 outdoors than a 450. He was now dating Jamie Lynn Spears… Okay, I made the last one up. But the excuses and presumptions went on and on, everyone seemingly forgetting that this is the same rider who guided Team USA to victory at last year’s Motocross of Nations. The bike he was aboard? An RM-Z450. That right there made me realize that RD can ride a 450 pretty damn well on a motocross track, so I had no doubt that he’d be a frontrunner in this year’s Lucas Oil AMA Motocross Championship. 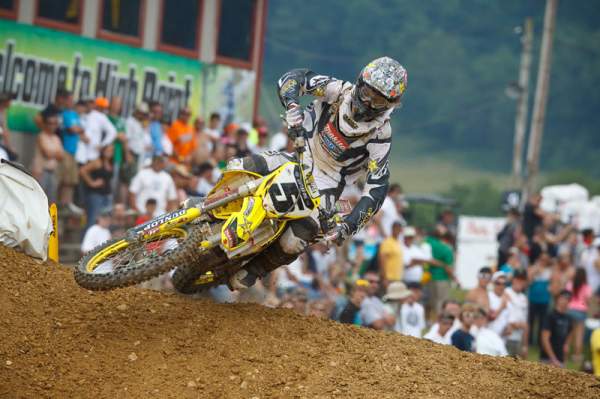 I really took some time to study Dungey this past weekend at High Point, and he makes going fast look so easy that it almost looks like he’s going slow. He’s smooth, calculated, rarely makes mistakes, and he’s in shape. In fact, I looked at the lap times from the second moto, and from lap three through lap thirteen, his times didn’t fluctuate by more than a second. His starts aren’t too bad either, but when he doesn’t come out of the gate as well as he would like, it’s fun to watch. Case in point: how great was it watching him chip away at Andrew Short’s second-moto lead on the rough and technical Mt. Morris course last Saturday?

I know it probably seems like this post is just about how good Dungey is, but after this weekend, I really don’t see anyone stopping him from winning but himself. He now has four straight moto wins, tallying 100 points in two races, and has a one-moto points lead over GEICO Powersports Honda’s Brett Metcalfe.

Speaking of Metty, he certainly deserves some credit for his sudden success on the 450. Jagermeister KTM’s Mike Alessi now sits third in points, followed by the defending champion, Chad Reed, who is 31 behind Rockstar/Makita’s Dungey.

And that brings me to the final point: Has everyone now written Chad Reed off because he had such a bad day at High Point that it made Dungey's Hangtown letdown look like a podium finish? Guess we will begin to know the answer to that on Saturday afternoon.