DNA Shred Stix/Star Racing Yamaha’s Jessica Patterson is having a killer season in the WMX series. Four motos in, she has won all four going away. We caught up with her after her dominant performance in Texas to find out what has changed for her this year.

Racer X: When you came into the season, did you feel like this was the performance you could have been putting in?
Jessica Patterson: Yeah, we kind of got a late start a little bit, but right when I got on the bike, I felt awesome. I thought this was probably going to be my year. I felt great. Me and Ryno [Ryan Hughes] have been working awesome. I was excited and I just thought everything was coming together, that it was going to be my year.

What about having to ride these tracks after everyone. I mean, as gnarly as it was for the 250cc guys, you still have another race after that. How hard is that?
It’s pretty gnarly. The tracks are really rough. You have to kind of deal with the sun a little bit, and you’ve really just got to look for a lot of good lines. You’ve got to have open eyes, for sure. I think what’s helped me a lot too, though, is I excel on rough tracks, and last year we kind of had a little bit smooth tracks. I’m just not the best in smooth tracks, obviously.

Ryno wants you to ride on rough, rough stuff all the time, right?
Yeah, we’re always on gnarly tracks. He’s like, “If you want to be in shape, you have to ride gnarly tracks. You can’t go to all these smooth ones.” So I’m like, “All right!” So we’ve always ridden on really gnarly tracks and it’s been a lot of help, I think for me, and that’s why I think I do so good.

Last year you were working with Ryno but it seemed like you would get out front and then you would fall. I think you fell in, like, 70 percent of the motos last year.
Yeah, I threw away pretty much every single race. I was horrible. There’s no doubt I was in the best shape I could have been in. Honestly, I think it was a little bit of lack of equipment I had. I struggled a little bit more. I think I had to ride a little bit harder to keep up and I just wasn’t in my comfort zone.

So you were pushing yourself?
I was just pushing myself way too hard, and I think that’s where the mistakes came from.

It’s just the equipment, mainly, that changed that for you?
I think so, but me and Ryno kind of switched it up a little bit this year. We do our hard work, but not as gnarly. We’re actually resting a little bit more than we usually do, so it’s a little bit different program we’ve got going on. Also, I think equipment has been a big help too.

You’re perfect now, so is it important to you to keep that up? Or is the overall big picture – the championship – more important?
Like I said, I would rather take the championship any day over every overall, so I just want to get that. If I get every win, cool, but if not, whatever. I’d rather get the championship. 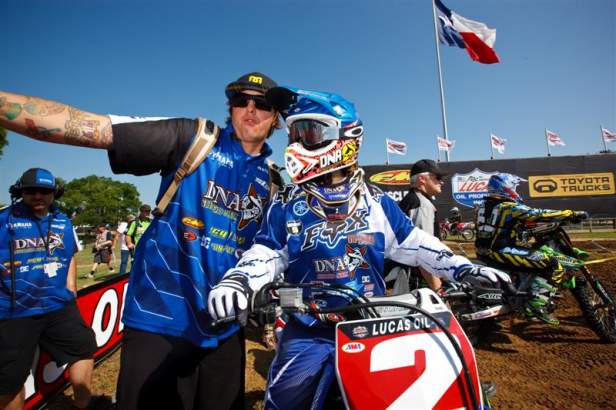 Jessica and her mechanic/boyfriend, Eddie Ray, are focused on the championship.
photo: Simon Cudby