Woodcliff Lake, NJ - Husqvarna has a banner crop of bikes set for the 2011 model year. Beginning with the launch of the amazing 2011 TE630 and SMS630 models earlier this spring, Husqvarna has come out swinging again with the all-new 2011 WR150. Think of this 2-stroke buzz saw as a BMX bike on steroids! Based on the highly successful WR125 model that has served to introduce a whole generation of young riders to the legendary Italian marque, the WR150 continues to prove good things come in small packages. 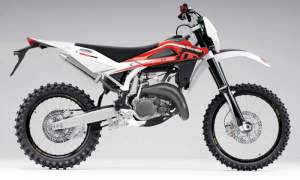 Over the years Husqvarna's WR125 has developed a near cult-like following for its unbelievable performance and reliability. In fact, Husqvarna engineers working in conjunction with importers and race teams from around the world determined that the only thing that could make the WR125 even better was more torque and response. Mission accomplished as the upgrade to a 144cc displacement is the ideal solution. However, the WR150 gets more than the motor punched up!

In addition to expanding the engine capacity, further refinements taken from the 2010 WR125 include a redesigned chromoly trellis frame with improved geometry, beefier engine mounts and reinforcements in key areas in the chassis to handle bigger displacement powerplant. "The 2011 WR150 is an impressive package any way you measure it," notes Husqvarna Motorcycles NA president Mark Brady. "It makes for an ideal complement at the other end of the model line spectrum to its TE630 and SMS630 siblings."

Above and beyond the bigger engine and refined chassis, the WR150 is fitted with superior suspension components: 50mm Kayaba forks matched to a Sachs remote reservoir rear shock. Husqvarna's highlights also include IPD (in-mold plastic decoration) graphics technology and the updated headlight/rear taillight assemblies that came on the 2010 WR125 are featured as well.

"With three hot new models already on U.S. shores, the 2011 model year is shaping up to be a break-out year for Husqvarna," concludes Brady. "We are looking forward to the return to dominance in the off-road motorcycle scene here in America."