However, the reality is that Qwest Field isn’t build for supercross, it’s built for the Seattle Seahawks. But suffice it to say that weather is always an issue in Seattle, and this year is no exception.

The schedule was pushed back today from the normal mid-day starting time for practice to start at 3:45 p.m., after the 3 p.m. track walk, and each practice group got one practice session instead of the customary three. The track is so soft right now, and is breaking down so quickly, that track maintenance was needed to get rid of ruts in the turns and on jump faces after just the first two Lites practice sessions.

To say that the top few Lites riders were very close in times would be an understatement, as the top four were separated by a half-second on the rutted and technical course. 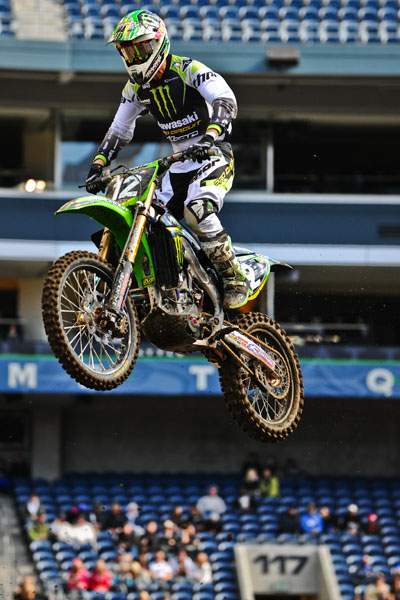 GEICO Powersports Honda’s Trey Canard made a quick break to start the session and jumped the triples on the first lap, and he had the fastest time for a while, but eventually it was points leader Jake Weimer of the Monster Energy/Pro Circuit Kawasaki team who grabbed the top spot with a 58.418-second laptime.

Those were the only four guys under 59 seconds, but next came Tickle’s teammate Max Anstie just three hundredths of a second in front of Weimer’s teammate Josh Hansen, and then Eric McCrummen, who was out in the non-seeded practice which went out first. Then came Rockstar Suzuki’s Ryan Morais, MCRMX Yamaha’s Travis Baker, and then Jeffrey Mann, also from the first practice session.

In the 450cc session, GEICO Powersports Honda’s Kevin Windham had the fastest time for the entire practice session... until the last lap, when San Manuel Yamaha’s Josh Hill put in a time just a hair faster. Windham’s time was a 58.188, and Hill, who is from the Pacific Northwest, dropped a 58.044. 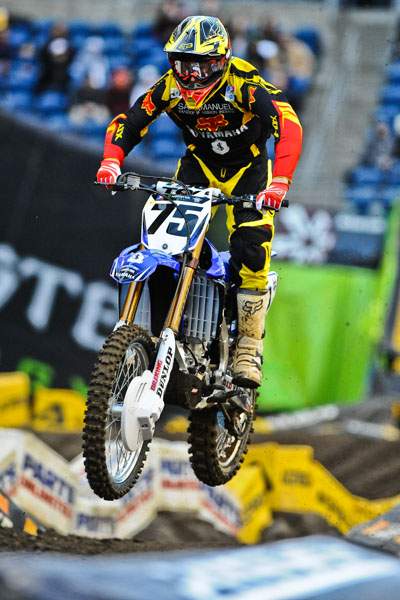 Those were the only five guys under 59 seconds, but next came 2010 Supercross Champ Ryan Dungey, who fell twice in the practice session, then Millsaps’ teammate Andrew Short, MCRMX’s Kyle Chisholm, JGR/Muscle Milk/Toyota Yamaha’s Justin Brayton, and then Reed’s new teammate Nick Wey.

In his first-ever race on a 450, Valli Motorsports Yamaha’s Kyle Cunningham put in a time that landed him 13th, and another east-coast Lites guy, Troy Adams, came in 16th on his RM-Z450.
Read Now
July 2022 Issue Now Available