Racer X: It seems obvious that your bike just got used to landing on the podium while you were hurt, and that’s why you did it today in only your second race back. She gave you one race to get used to racing again, but then she wanted back on the box...
Andrew Short: Yeah, kind of like Trey [Canard]: The first race was horrible, but today I wasn’t that special either, but I just wanted to get going in the main. But I rode solid, stayed within my limits, and it feels great just to be racing, but to get on the podium is even better.

Talk about the track over where Ryan Villopoto and Ivan Tedesco crashed. It got down to concrete on the one side, in the transition, and the other side was crowned on the jump face...
Yeah, it had a big kink on it, and it was only about three or three and a half feet tall, and the landing was like six feet, and it was like a spine – really steep on both sides. There was almost no landing. It wasn’t very forgiving, and it was really unfortunate that those guys went down. I had some scary moments there all day, too – I think everybody did – but especially in the main event. It got really tough in the main because of the conditions you talked about, and it was the same with the other rhythm section [on the opposite side of the stadium], because it was really gnarly as well to do it, and if you screwed up, it cost you a lot of time. It was a hard track to put in 20 laps on, especially for me. I haven’t been racing.

Is that an excuse?
[Laughs] No, no excuses. I’m just saying I got a little tired out there. Last weekend, I felt pretty solid, but this weekend, I was good for about 15 [laps], and that’s a shame... 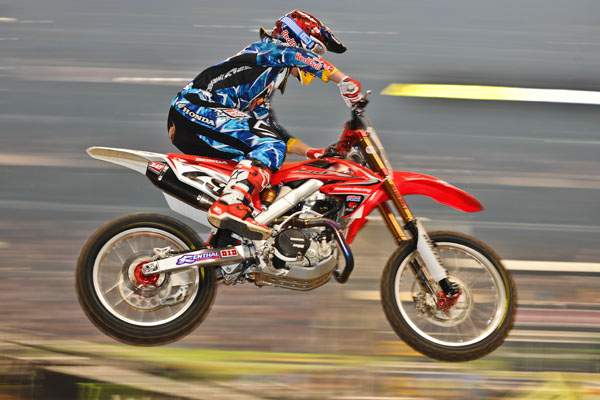 Andrew Short scored his first podium of the year, but his bike's sixth so far...
Steve Cox Photo

Well, last week you felt solid because you weren’t going as fast, right?
Maybe, but I think the track was a little easier. Tonight, the track was tough, because it got rutted up and rough, and it was changing all the time, and there were the things you talked about, too. When you’re doing a jump like that, and you know the consequences if you come up six inches short is a ride on the Asterisk Mobile Medical Unit, you start holding your breath, and then you start breathing a little harder, and that makes it tough for 20 laps.

It kind of seems like they could take a lesson from NASCAR in that you don’t have to make things have a huge penalty for not making a turn, or in this case a jump. You can make it so that it’s forgiving and still hard to do, right?
Yeah, I think they did a great job with the track, but it’s just that it deteriorated, and you can’t ever predict that. They do study it, and I think Dirt Wurx does a good job, but it’s just a shame that it developed that way. You just never really know how it’s going to be.

It’s got to be a big boost to land on the podium this quickly after you came back, though, right? You didn’t do that at all before you got hurt this year...
Yeah, but I think for me it’s just about getting used to the bike, getting my timing down again, and going over the gate. My main goal right now is the outdoors, and I’m out here just to try and get a Honda on the track and to be there for Honda and Red Bull, so it’s like a cherry on top to get up here on the podium.

Have you started testing for outdoors?
No, I missed all that because I was hurt [laughs]. I ride outdoors once a week – on Tuesdays – and that’s kind of my day to get up to speed and get used to the bumps and ruts, and then Thursday is supercross time. And now that I’m racing, I’m not riding nearly as much at home. My main focus is just to be ready when Hangtown comes around.

Does it take away from your riding and training to be working on your website, AndrewShort.com, doing your videos and all of that?
[Laughs] No, that’s R&R. That’s recovery, when I’m sitting on the couch. So check out AndrewShort.com, because I’ve got a good video this week...
Read Now
March 2022 Issue Now Available