For this week's Smith Optics Track Walk, last year's St. Louis track designer, Travis Pastrana, takes you on a lap of the 2010 track.

Tracks change greatly with the smallest of variations in the build, but I like the starting point for the upcoming St. Louis SX. It is known for having "hero" dirt—the dirt has such amazing grip that riders who throw caution to the wind have a better chance of staying on their wheels. With five 180-degree corners, this track will favor aggressive riders who know how to carry momentum. 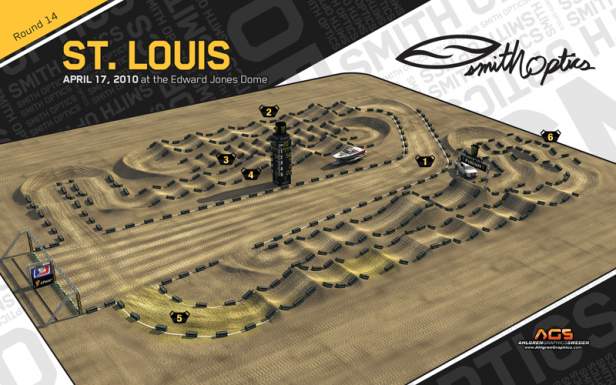 
1. The 45-degree left after a very long start straight will favor riders who have good reactions, not riders who work magic in the first turn. Guys like Chad Reed generally fare better with a sharp 180-degree corner.

2. It looks like it could be two lines that are about the same overall time down the first set of jumps. The Dirt Wurx guys do a great job of making sure there’s always a plan B on the first straight, in case there is a bottleneck in the first turn.

3. The whoops are directly out of the corner, so I wouldn't expect anyone to generate too much more speed than anyone else. Also, with the tacky dirt, you can expect one line to get a rut that most of the riders will be riding by the main event. The rut is easier and sometimes faster, but sometimes taking an unused line is the difference, especially near the end with lapped traffic. Just ask Ryan Sipes.

5. A lot of riders have come to despise the sand sections in supercross, because they have proven to be one-lined and separate the field too much after only the first lap. I think this left will be good because with all the speed coming into it, the main berm will be pushed way outside. If this happens, a majority of your passes will probably happen in this turn. Go wide and triple into the section or block your line by going inside in the sand corner. Either way, you will probably be passed.

6. I always liked on-off jumps right before the finish line, because it's impossible to block the inside if you jump it but risk everything if you choose to play it safe and block. I think this will set up a great finish.