Advertisement | Advertise with Us
Welcome to the Christmas Day version of Racerhead. Here’s hoping that everyone got what they wanted under their trees—supercross tickets, new riding gear, Jeremy McGrath’s Showtime Syrah wine, G.I. Joe with the kung fu grip—and is getting to enjoy the weekend with family and friends. Unfortunately, if you’re a soldier or the family of a soldier, that’s not the case for many. Maybe take a moment and think about how fortunate we are that men and women serve our country overseas, trying to make the world a safer place for everyone.

Needless to say, 2009 was a tough year on a lot of motorcycle fronts: the economy, some unfortunate accidents, lost friends, the lead law, etc. But it was also a great year. We saw some compelling championships, strong turnouts both indoors and outdoors, and we seem to be back on the right track, both literally and figuratively.

One rider we're hoping to see get back on track is Jason Lawrence, who was released from Riverside County's Southwest Justice Center yesterday evening. Sentenced to one year, Lawrence picked up enough good behavior time over the past four months to earn his freedom early. Will we see the #338 at Anaheim 1? We'll let you know as soon as we find out.

Speaking of supercross, some sad news regarding one of our favorite programs. The Racer X Gas Card program, which, with the help of our readers, gave $750 to the first guy not to make the AMA Supercross main event, will not be back for 2010. Changes in the program meant that it was a time for a change here too.

Thanks to everyone who has supported the program over the years, especially everyone at Feld Motorsports: Charlie Mancuso, Ken Hudgens, Todd Jendro, Dave Prater, T.D. Lovett, and more. And also thanks to the readers who matched our $250 at each race to make this a nice little bonus for the riders who needed it most: the privateers. Maybe we can get something else rolling in the future that works just as well as the Racer X Gas Card did over the years.

Okay, here are a few really cool videos to watch over the weekend:

Check out this video of Christophe Pourcel riding his new track at his new home in Florida. The track is insane!


Here’s some old-school motocross, from Czechoslovakia, circa 1968. It stars Hakan Andersson and Joel Robert, along with some very excellent martini lounge music!
http://www.youtube.com/watch?v=YQ_86nxWsMA&feature=related

And here is another of those amazing Flicker threads that pop up, this time with some old Trans-AMA action from a track near Plano, Texas, that was around in the seventies. Check out The Man, Bimbo, Pierre, Bad Brad, Marty Smith and more:
http://www.youtube.com/watch?v=YQ_86nxWsMA&feature=related

Let me turn it over to Steve Cox out in SoCal…

On Tuesday, I unbolted myself from my office chair and headed out to the test tracks to get some time with the guys and see what was going on. First stop was MX Heaven in Perris, where they have a full-on supercross track built into their back yard, and Tommy Searle was there shaking down his FMF KTM for the Lites West. And here’s the interesting thing: Searle looked really good! Keep in mind that he’s never ridden supercross before – not the real thing, anyway.

One part of the track had a 90-degree right into two singles and a table, followed by a bunch more jumps, and he was going triple over the table to the downside, then tripling and tripling again into the following turn, which seems like a 450cc move. He ain’t scared. Although he had a chain problem while I was there when he landed on top of a table for an on/off section and his chain broke/came off. He went nose-first into the next jump and saved it somehow, but he did knock the wind out of himself. Still, he killed it the rest of the time I was there.

Interestingly enough, Brett Metcalfe appears to have had a chain issue of some sort cause him to go down pretty heavily and injure his ankle this week, but Metty sounds like he’s going to be fine. He’s just going to miss the beginning of the West, and Blake Wharton sounds like he’s going to take his spot in the West Region on the GEICO Powersports Honda squad alongsideTrey Canard. That leaves Metcalfe and first-year supercrosser (and Southwick National winner) Justin Barcia on the East for the team, as of now.

From MX Heaven, I headed to the Kawasaki test track, right off the 15 Freeway in Corona, where Monster Energy Kawasaki’s Ryan Villopoto, Ti-Lube/Brown Motorsports Kawasaki’s Nick Wey, and Monster Energy/Pro Circuit Kawasaki’s Jake Weimer were putting in some track time after it had rained the night before. Villopoto had nailed a rhythm section that Chad Reed did when he was out here last week, and Wey was really close to doing it when I bailed on the place, even though it didn’t seem like it would be faster than the way everyone mostly was doing the section.

For some reason, very few people are talking about Weimer coming into Anaheim 1, and he won that race (and two others indoors, and three others outdoors) last year!

Just as I was leaving the Kawasaki track, Josh Hansen pulled in. He’s going to be an interesting dark horse for this season.

From Kawasaki, I went across the freeway and up the hill to Yamaha, and I just missed Ivan Tedesco on his way out. But I caught Gautier Paulin, being coached by David Vuillemin (he said call him “DV934” again because someone else is #12 – the aforementioned Weimer), and he looked pretty good considering he had been on a supercross track about a half-dozen times at that point. His temporary teammate of sorts, Broc Tickle, was out there tearing it up as well, and I did a 5 Minutes With Tickle yesterday, so check it out HERE.

After watching him, I’ll bet Tickle’s going to be getting a lot better starts this year, and when he starts at the front, he tends to finish there. Also going at it were MCRMX Yamaha’s Dan Reardon, on his YZ450F, and his 250F teammates Jeff Alessiand Travis Baker.

Somewhat related to Searle, who almost didn’t have a KTM ride this year when the factory nearly pulled out of racing, I chatted on Facebook a while back with Josh Summey, who rode for the KTM squad (then run by MDK) last year, and he’s got a job at UPS and seems to be doing really well, although this time of year is probably killer for him at his new gig. Kind of a trial by fire!

Summey’s 450cc teammate last year, Travis Preston, has a new gig as well. He’s now the communication director for JGRMX, and he’s been riding a blue bike and training some folks as well. He’ll be moving back to North Carolina when the series leaves California. He seems to be in really good spirits, which is great. Travis is one of the good ones.

I was also informed on Tuesday that Michael Byrne is eligible for the Lites class in supercross. Under the current rules, if you finished in the top twenty in either of the previous two seasons in 450cc SX points, you can’t race the Lites class, but Byrne has been hurt for two years indoors. Although he’s been looking for a 450cc ride, I think it might be kind of cool to see him step back down to the 250cc class for a year or two. He could do some damage if he’s healthy.

But it brings up an interesting point, which is that Byrne is eligible for the Lites class indoors but Kyle Chisholm isn’t, because he was in the top twenty last year. It seems to me that most of the time, Byrne > Chisholm, yet Byrne is eligible and Chisholm isn’t? Kind of strange the way that works. There’s got to be a better way to determine this stuff.

That’s about it from me, so Merry Christmas, everyone. I’m going to go get by the fire. It’s cold here in SoCal right about now.

Have you seen the Sean Borkenhagen video that Matt Francis shot last week? If you don’t absolutely love Borky now, you will after you watch this. He’s got a pretty serious Napoleon Dynamite vibe going on, and the closing clip had me laughing hysterically. Anyway, check it out at Racer X Films right here.

There’s also a little video by Matt documenting the Troy Lee Designs/Lucas Oil/Honda team photo shoot this week. Maybe give that a look too while you’re polishing off some Christmas cookies.

Terrible news about Matt Goerke this week. The Moto Concepts rider crashed in a rhythm section at the Yamaha test track and broke his tibia/fibula. One of the problems with having the test tracks where they are is the EMS response time. There is no physical address to any of the tracks, so a call to 911 is usually frustrating. When Christian Craig crashed at our track in November, I had to meet the fire department engine and ambulance company off the exit at the I-15 and lead them to the track. And the nearest station is at least ten minutes away. The best-case scenario is about a twenty-minute response time. That seems like an eternity when you’re spread out in the dirt with badly broken bones. Hopefully, everything went well with Matt’s surgery and he’ll be back on his feet soon.

Nate Adams is racing supercross—again. Remember his attempt to qualify for A1 last year? Nate had a good time going that would have easily put him into the night show when he came up short on a triple and fractured his wrist. He’s determined to make it to the program, and he looks pretty good. He’s actually missing the first few performances of the Nuclear Cowboyz FMX show to do this. That’s commitment right there. Good luck, Nate.

I came across a really cool product this week. I’ve seen so many stolen bikes lately that when Jeff Cranny showed me his patented locking tie-downs, I knew right away he had something great. His Lockstraps are well constructed using eight bound steel cables, sandwiched between double nylon webbing, tuff rivets, and dual combination carabineer locks. They are 8.5 feet long, 1.5 inches wide, 1/4" thick, and weigh 2 pounds each. They come backed with a 100% satisfaction guarantee and a one-year parts-and-labor warranty. Now you can secure motorcycles, tools, equipment, bicycles – anything - in less than a minute. Each strap is sold individually and has a retail price of $39.95. Lockstraps can be found nationwide at local shops, dealerships etc. They can also be purchased through www.lockingtiedowns.com. This is honestly the best and easiest thing you can do to protect your bike. Check it out.

Finally, be sure to come by Perris Raceway this Sunday to support Christian Craig. The main track is open for riding from 9 a.m. to 3 p.m. and there is a mini track for the kids that will be open as well. With the overcast the track will be perfect and it’s all for a good cause.

Craig Martin is a former pro motocrosser who now owns Action Motorsports in Decatur, Texas. He’s also just launched a new E-commerce website for all of your racing needs. Check it out.

Despite missing the first few rounds of European MX2 championships because of injury, 17-year-old Harri was able to finish the season at sixth place, winning the German round and placing on podium few times. Harri also placed second at Finnish Supercross series, winning Siilinjärvi round.

And that’s about it for Racerhead. Time to get back to the kids. Have a safe and merry Christmas and a happy New Year. Look for a few special features here at Racer X Online next week. Thanks for reading Racerhead. See you at the races. 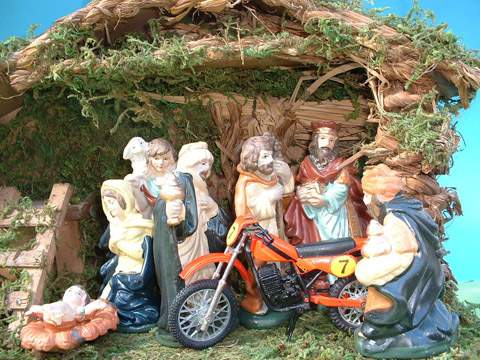