The apparel includes three series of jerseys, pants and gloves in three price points; the top of the line A-Series LTD, the A-Series and the SD Series.  All three series represent a focused effort to engineer and style comfortable, durable apparel using rider feedback and knowledge gained from more than 9 years of producing MX apparel.  Features found throughout the line include soft jersey necks that are equally comfortable with or without the use of a neck brace, strategically placed venting for heat management, durable knee materials that comfortably accommodate knee braces and flexible lower back panels. 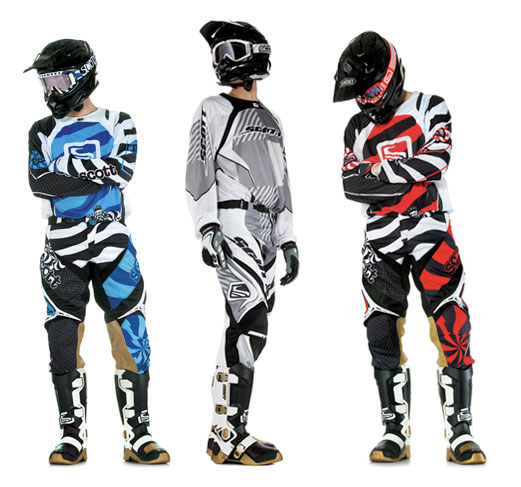 Check out 2010 gear in action by clicking here.

Keep your eyes on Team Canidae Motosport.com, Kawasaki at all outdoor nationals to view the latest gear from SCOTT.

The Chad Reed show was in full effect this weekend in Washougal.  In Moto 1, Chad took the holeshot with fellow Scott teammate Tommy Hahn on his rear fender.  The two riders checked out right away with Scott Goggle athlete Clement DeSalle, the MX Panda, taking home 3rd on a borrowed bike in his first outdoor national.  In Moto 2, Tommy was out front as the first turn grew near and was taken out in a giant pile up.  Grant and JLaw built a sizeable lead off the start.  After running over Hahn at the start Chad had to turn it on from outside the top 5. Hahn was unable to get back on the bike, while Chad dug deep and went to work. He fought all the way back to pass Grant with three laps to go and finish 1 - 1 finish for the day, extending his overall points lead.

Moto 1 was all about Kyle Cunningham for the Canidae/Motosport.com/Kawasaki/SCOTT Team at Washougal.  With some problems at the start for the Pro Circuit boys, Blake Wharton sped to the lead with Dungey on the chase.  Kyle was a distant third and started reeling in Wharton and Dungey.  Dungey chased down Wharton with Cunningham hot on the trail.  Cunningham pulled in Wharton but ran out of laps as Dungey took home the Moto 1 win.  Kyle took home 2nd in the Moto while Christophe Pourcel and Jake Weimer worked their way up to 10/11.  In Moto 2, Pourcel took the holeshot and checked out with Weimer right behind him.  Cunningham started out mid pack and moved into 10th before going down after colliding with another rider in the same line.  Pourcel's big win in Moto 2 was enough to put him in the 3 spot overall on the day and a tie with Dungey for the overall lead.  Even with a DNF in the second moto Kyle still got a top ten on the day which was great for the Canidae rider.


Pourcel third overall on the day.