This week’s Smith Optics Track Walk is brought to you by the most famous living motorcyclist in the America, Travis Pastrana. Travis designed the zany track you're about to take a lap around, and he also plans to race on it. 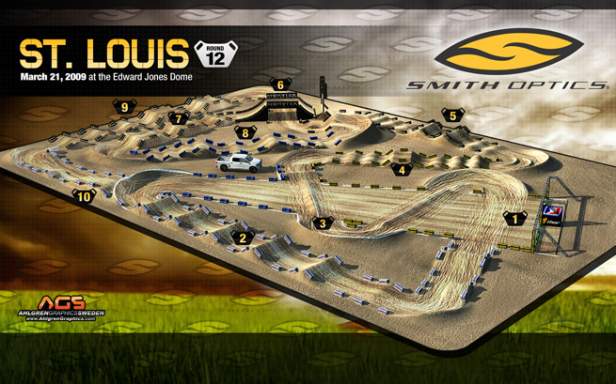 1.) In the original plan I wanted to use sand on the inside of the start and then have jumps on the outside, but after a few looks and one outright back hand from a fellow competitor, I opted for an even start with two small jumps that will be used as berms on the lanes that cross over the start stretch. It will still be interesting though because the diagonal crossing lanes will mean that riders are in the air at different times.

2.) The first straight will have jumps that are taller and more round than typical supercross tracks with the exception of one big lip which might make for a quad if we can get enough speed.

3.) I was inspired by watching an old track with dual lines and plan to have an inside and outside berm on both the start zig-zags.  The 4th turn will be sand, which should make for the usual carnage but hopefully it will remain two lines instead of follow the leader as we have seen in most of the sand sections this year.

4.) Section four will be a whoop section with big whoops and a table top just past half way.  The goal is that people who take the outside will be able to jump on the table top, while the people who use the inside will be forced to blitz up to the table.  Those who try to jump onto the "center island" will have the option to jump off and see what happens or take the safe rout by locking up the breaks and then blitzing out.  With the dirt being softer and more sandy in St. Louis, I would expect that a line will wear in to make this a fast and scary section that all will have to do by the main event.

5.) Section five looks different than I intended it to be, but I have talked to Rich and the Dirt Wurx guys and I feel that we are on the same page now.  Whoops are almost always the same height, which makes it easy to get on top, so my goal is to throw a curve ball in by making all the whoops different sizes.  They will be slightly more rounded than typical stadium whoops, so we shouldn't have injuries, but it will throw the guys for a loop who practice with standard issue whoops on a regular basis. I'm hoping this will help riders who are more creative shine through.

6.) I wanted an over-under and I put it in a turn so you can either whip all the way over it or jump to the top and launch off to the next jump.

7.) The way you handle number 6 will determine how you ride through 7. It will either be a landing and then a double, or two tables to skip across.

8.) Section eight is my personal favorite. It's a triple, but instead of making it easy, the takeoff and landing are whooped out. I'm not looking forward to riding it, but man it makes me smile when I see it on paper! After the whoop triple I tried to make it possible for a split line choice all the way to the back stretch. It will be slow and I expect a lot of arenacross-style take out moves! Good times.

10.) I've never seen an off-camber on a supercross track, so the idea here is to go inside if you’re technical and outside if you like berms. This will be wider than a normal SX corner and with any luck we will be able to jump from the last jump of the rhythm section all the way to downside the off camber.