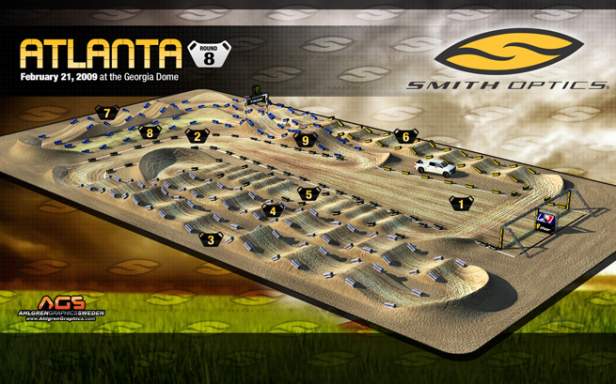 1.) “Last week's start was pretty long, which wasn't surprising for San Diego, and it looks like this week's track in Atlanta will be even longer! I was never a fan of long starts in Supercross when I used to race, mainly because the first turn usually isn't wide enough, unlike a national track where there's always lots of room for riders to go wide. Riders will probably hit fourth gear by the end of the straightaway, and as soon as they do, it will be time to start braking and downshifting. I think the best gate pick for this start will be next to the doghouse, on the inside preferably, but the outside will work as well. Being next to the doghouse has a few drawbacks though... First, you absolutely have to get a good jump, or you'll have nowhere to go in the first turn. Now, assuming you do get a good jump and get to the first turn in first place, you have to be extra careful about the guys coming from the very inside, as they could push their braking too far and hit you as you're getting into the turn, pushing you off the track. But since you would have a better line coming into the turn, you should be able to come in much faster and get the holeshot. The safest gate pick is way inside, because if you get a good jump, no one will come underneath you in the first turn, but if you get a bad jump, you can always hug the inside bales all the way around the turn and still come out in the top five.”

2.) “The first turn in Atlanta looks pretty safe to me, mainly because it's followed by a short straightaway and another 45-degree left turn. It should leave enough room for riders to get sorted out before entering the first rhythm section. I predict there will be a few crashes on the outside, since riders coming from the right side of the start will get pushed wide by the ones coming from the left side, and I wouldn't be surprised if a few riders ended up in the sand section.”

3.) “The rhythm section following the start looks pretty straight-forward, although I'm curious to see what will be faster before the triple. Will jumping 2-3 be faster than 3-2 or not? It really depends on the steepness of the fourth jump’s takeoff. If the takeoff is smooth and throws you forward instead of upward, then going 3-2 through that rhythm section will be faster then 2-3, because from the looks of it, riders will go pretty high and lose speed if they go 2-3, since the middle jump looks pretty steep and tall. If it's possible to jump over that middle one, it's probably worth it! A 65-foot triple follows, right into a 180-degree left turn where we might see a few block-passes, due to the nature of the rhythm section before the triple.”

4.) “I think section four will be interesting. From what I can see on the track map, everyone will go step-on, step-off, and then 3-2 into the next turn. This will probably be the fastest way through that rhythm because riders will be able to stay low on every jump. That doesn't sound very interesting, does it? Well, there's another way to go through this rhythm section, and I know most of the top guys will try it. I don't think it will be faster than the way I described above, mainly because it will throw riders higher in the air, and any time spent in the air is wasted time you could be spending on the ground moving forward. But again, this vastly depends on the shapes of the takeoffs. The other way is as follows: Jump over the tabletop, and then go 3-3 into the turn. Going through the rhythm section this way means that you only have to jump three times instead of four. It sounds faster in theory, but like I said, the less time spent in the air the better, and going 3-3 at the end looks like it will throw guys pretty high. We will see!”

5.) “It's now time for some whoops! Not too many by the looks of it, though, since they have been split into 2 sets in the same straight. Whoop sections have been pretty creative this year, and very different from when I used to race. I remember we used to get those long whoop sections with big ones in the middle! I haven't seen a whoops section like it this year. They have all been broken into small chunks, and lots of them where followed by a double or step-up. The whoops in Atlanta are no exception. The first set looks like it will be pretty small – or normal sized – and the second set directly following the first one will be pretty big, from the looks of it on the track map. I don't think there will be many passes here. Usually, faster riders make up a lot of time in long whoop sections, due to the momentum they pick-up by entering them faster than other riders, but in small or broken-up whoops, everyone's pretty much going the same speed, so you won't see many passes. Finally, a little bit of breathing room follows the whoops, where the track crosses through the starting line! This track's been pretty busy so far, and lots of riders will appreciate this short straight, where they'll take a deep breath and get ready for the rest of the track.” 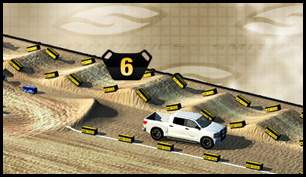 6.) “I hope riders will take advantage of the short straight before section six to take a breath and get ready, because this following rhythm section looks pretty gnarly! It's long, full of big jumps, and did I mention how long it is? I can see the top guys tripling into it, although there isn't much room to set up for it. They're probably going to have to seat-bounce the first takeoff if they want to triple the first three jumps, and they'll also have to go outside in the turn before to have enough speed to get over the third one, which will open up the inside and give whoever is behind the opportunity to block-pass them. Sometimes, though, it's worth it, especially if you're going to make up a second or two by the end of the rhythm section. The problem you're faced with by tripling the first three jumps is that you'll be faced with a short and steep wall for the next jump, and it's going to throw you pretty damned high! This rhythm section has a few different ways to jump through it, and at this time I can't really tell which one will be faster. It's definitively going to be a section to watch closely, because I think there will be many passes there and probably a few crashes, too. How riders will finish jumping through it really depends on their rhythm at the entrance, which will dictate the rest of it.” 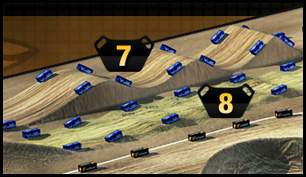 7.) “Section seven will be another breathing area for riders, with only one triple and nothing else. Triples are by far some of the easiest jumps on a Supercross track. They look hard because of their size, but once you've cleared it once, it's a walk in the park after, and a good place to take a deep breath and get your focus back. They're always a little scary at first, even though they're always the same size! After all, nobody wants to come up short on a 70-foot triple! And over-jumping them is pretty painful, as well. I'm talking from experience! You won't see much action here, other than guys going high – triples are always pretty cool for the crowd!”

8.) “Finally, another sand section! I have missed the infamous sand sections at the last few races, because they're always great for photos! This one in Atlanta looks like it will be pretty fast, with a few whoops in the middle. I'm willing to bet there will be a bunch of passing attempts going on at the end of it, going into the right turn before the finish-line jump. The thing about sand is, the faster you go, the better. But in Supercross, this can get tricky because most of the sand sections are usually followed by a sharp turn, so you have to start braking while still in the sand, and this can lead to many crashes. Most riders will go inside in the following turn, unless the finish-line jump is too big to jump from the inside. That probably won't be a problem in the Supercross class, but it might be in the Lites, so you will probably see many Lites riders using the outside berm there to get enough speed to clear the finish-line double.” 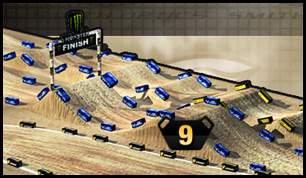 9.) “This is the end of our track walk! Finish-line doubles are always tons of fun for riders, mainly because they're often seat-bounced and all have a nice, big, steep landing, and they are perfect to throw some sick whips! It's also one of the best feelings in the world to cross that finish line in first place! Atlanta's finish-line double looks pretty big, while last week's one in San Diego was pretty small and many riders over-jumped it. It's also followed by a very sharp right turn onto the start straightaway, where you'll see many passing attempts for sure. Going outside in that turn is faster in the end because of the momentum you pickup in the straight, but by doing so you open up a huge door inside for anyone to go through and come block you at the exit of the turn. These kinds of turns are almost a lose-lose situation for the guy in front, because if he goes outside he's opening the door for the guy behind to come and block-pass him, but if he chooses to take the inside, then he's risking getting passed in the following straight by the guy behind him that went outside and picked up more momentum coming out of the turn. That's what Supercross racing is all about, though, making quick decisions, and hopefully making the right decision at every turn, every rhythm section and every whoop section. That's also why we love it so much!”

To finish this week's track walk, I would like to say thanks to Racer X for giving me this opportunity. I think it's a really cool feature and it's very interesting to read the different views and opinions from the different riders.
Read Now
December 2021 Issue Now Available