Round five of the Monster Energy AMA Supercross Series takes us to San Francisco’s AT&T Park, where you’ll find the following layout. For this week’s Smith Optics Track Walk, we tapped former supercross and motocross champion David Bailey to take us through a lap. 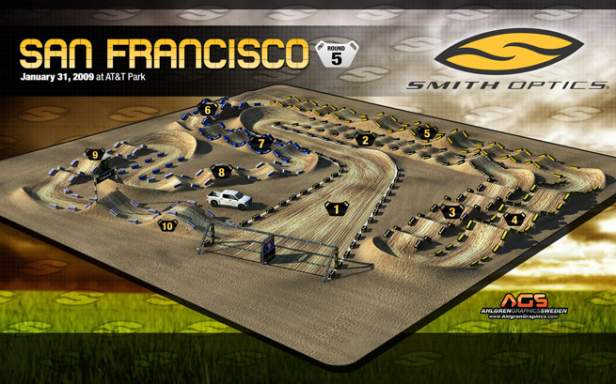 1.) “I always liked shorter starts because it makes getting out over the gate more important, plus if there is any trouble coming into the first turn, the speed is lower. However, because of the angle of the start and first turn (sort of like Red Bud), the guys on the outside can cause some problems if they get out quickly and squeeze the guys in the middle. I would try to avoid that by lining up just left of the box. Since most of the top guys will be there, I would move around a lot and act like an idiot to mess with the concentration of the guys next to me and hopefully have a better shot of getting out ahead of them!”

2.) “You'll want to have a good run at these whoops, which would be tough to do from the inside. During this week, I'd work on the whoops without a run in case I ended up in that situation off the start. From the outside, these whoops are pretty basic, but the higher jump at the end is a nice little curve ball. I think you'll see James and Chad slam into that jump hard and land on the nose to the inside of the next corner. I think it's important to finish off the whoops at speed and then deal with the jump rather than lay up near the end.”

3.) “This next section of jumps looks like a 3-2 from the outside or a 2-3 from the inside. It might be possible to seat bounce 3-2 from the inside, but some ruts may develop and make it trickier towards the end, so 3-2 from the inside would be faster and make the next left easier to manage, but it will take some serious skills to get over that middle one since it's a little higher.”

4.) “This is just a typical triple, but because of the next corner being wide open, it will be important to land exactly where you want with the bike angled just right so the landing and line through the next corner is seamless.”

5.) “This straightaway looks simple, but it won't be. The 250 guys might struggle to get over the little triple from the inside, and because you're landing right into the face of the main triple, it could pop you higher. Regardless, you have to clean the first one to make the big one, and as soon as you land you're staring at a possible quad into the next left. You definitely have a decision to make there, which I think is good for the racing and a challenge for the riders.”

6.) “This small-big-small triple is possible from the outside, but you have to add some footage to your line and leave the door open. Ultimately, I would quad in off the long straight, go wide, triple back to the inside and probably double-double the next straight, but that would be gnarly every lap! The other way would be triple-single into the inside, roll-double out or double-single out, but even that looks tricky. I like that there are options there. If there is a battle, getting through lapped traffic in that section will be a challenge, too.”

7.) “These big jumps are old school and will require some good timing. I don't see the advantage to trying to triple single since you still have to jump twice, so it's probably just a double-double, but that doesn't mean it will be easy. The approach to them and the decision of where to go after them is what will make this section interesting.”

8.) “This step-on, step-off might be tough to do from the inside, so again, hats off to the design for really screwing up the flow and creating a lot of decision making. Obviously, if you're coming from the outside, it's a pretty simple deal, but that leaves the door open for someone like Sorby! If you're coming from the inside, it looks like you might have to roll the first one and jump all the way out, but that's a lot of hang time. I think the goal there, assuming it's tough to make from the inside, is to have a slight gap on the guy behind you and treat it as an on-off.”

9.) “This wide-open S-turn is Block Pass City heading into the next step-on, step-off. You will need to go wide to step on/step off, but again you’ve got to watch out for the block pass. I would rail all the way around the right-hand bowl turn and come in way tight to the left bowl turn to cut off the block-pass angle and round off the exit way high and step on all the way to the right and jump across to the inside of the corner before the finish. I was thinking, when I first looked at it, that a set of whoops would be good there, but because you need a run at the step-on, it opens it up for some last minute block passing before the finish.”

10.) “This finish jump is going to provide some great whips, especially if you're coming from the inside, and I really like the way it carries right into the start and all the way around to the second corner. If you can't pass somebody through there, it's your own fault, because there is plenty of room to make something happen. I would imagine your pit board would be out there on the outside, so I would try to glance at it in the air if I were in a battle with somebody so I could focus on that endless sweeper when I landed. There are a lot of options out there and if you're confident in your jumping ability you can definitely set yourself apart, but it will be tough to be consistent. The track designers did a good job on this one. Anytime it's an outdoor stadium, I always scope out the weather and it looks like it will be clear and not too cold. Hope it's a good one!”